Kushal V R visits the Jain shrines and other relics in Basadi Hosakote, a nondescript village in Mandya district that was a major Jain pilgrimage centre in the past. 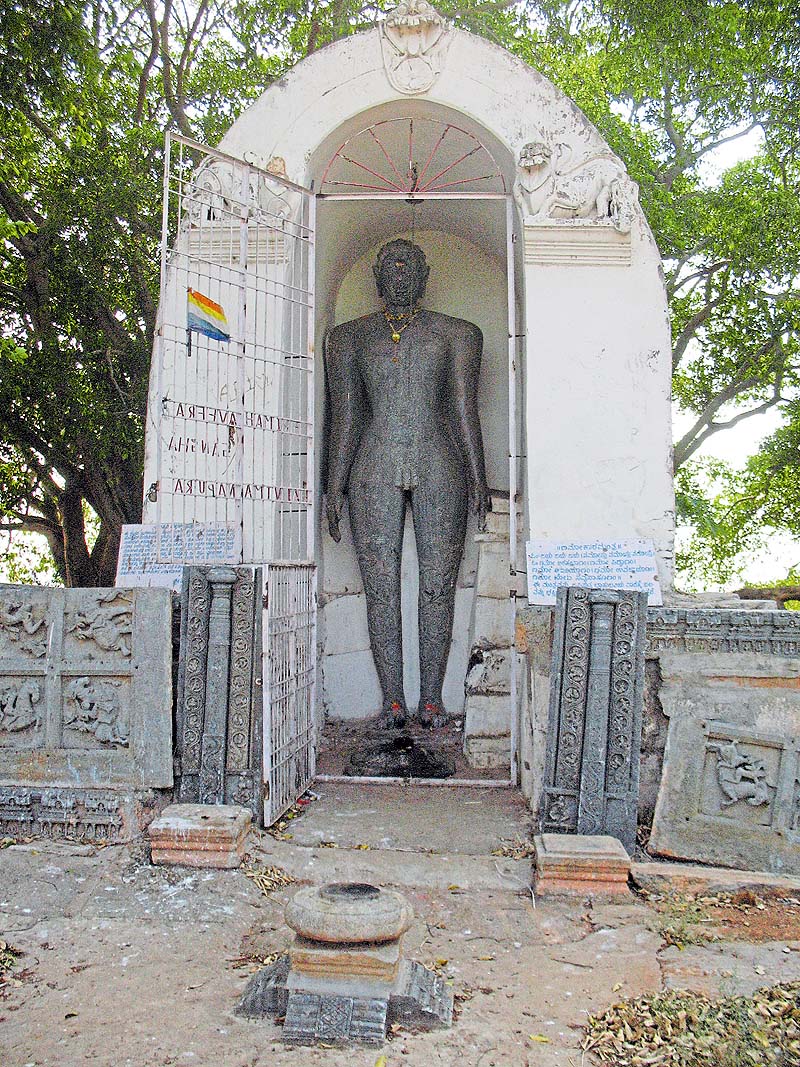 In the history of humankind, how god should be worshipped evolved into various different religions. While some of these religions have disappeared into oblivion, others flourished and stood the test of time due to their simplicity and ease of worship and as a result, they have been entrenched deeply into the hearts of people. One such religion that has made such a mark is Jainism.

Having spread rapidly across the country when it was at its peak, Jainism found acceptance in many parts of Karnataka as well and prospered under the patronage of Kannadiga sovereigns. Karkala, Venoor, Shravanabelagola, Moodabidri are still considered to be the bastions of Jainism and Jaina principles in the State. Whilst many are still unfamiliar with their rituals, the statues of Lord Bahubali or Gommateshwara are well known around the world and hence, they are major tourist destinations.

Unique statue
However, hitherto unknown to many is a small hamlet called Basadi Hosakote. Located near the picturesque backwaters of the famed Krishna Raja Sagara (KRS) dam, Basadi Hosakote is known for its Jain shrines. It is said to have been a major Jain pilgrimage centre in the past. Among its shrines, the village houses one of the most beautiful statue of Gommateshwara, which is said to have been built in the 12th century.

Legend has it that the renowned Hoysala emperor Bitti Deva’s (who came to be known as Vishnuvardhana later when he converted to Vaishnavism) closest aide and prime minister, Punisamayya, initiated the construction of this statue with the intent of converting the place into a Jain religious destination. Several inscriptions found here confirm this fact and also state that the revenue of several villages were earmarked by him for the upkeep of the area. Unfortunately, with the decline of the Hoysalas, this shrine town was eventually forgotten in time.

Sculpted in pure green soapstone in the classical Hoysala style, the Gommateshwara statue is about 18 feet high, and is resplendent in all its glory. It stands apart from the Gommateshwara statues found across Karnataka due to its unique traits. One of the aspects that make it look distinct is the way the creepers, that bind the legs of the statue, have been sculpted. It is done in a different manner compared to those found on other statues. The statue also appears to be leaning to the right.

Exquisite sculptures
In addition to the Gommateshwara statue, one can also find relics of several Jain basadis nearby. According to inscriptions, Basadi Hosakote housed five basadis dedicated to important tirthankaras. These are also built in the unique Hoysala style of architecture. The once splendid shrines now lie in a pitiful state of ruins with only a few mantapas still standing, bearing testimony to the glory of yesteryears. It is heartbreaking to see the beautifully sculpted statues of the tirthankaras and other exquisite sculptures lying around unattended and exposed to the elements of nature.

What piques our interest about this place is the fact that one cannot find a single follower of Jainism in the nearby villages. Neglected by everyone, the place would have been forgotten if not for the dedicated efforts of the villagers of Basadi Hosakote to protect this historical place as their own heritage.

Getting there
Basadi Hosakote is located near Pandavapura in Mandya district. It is about 150 km from Bengaluru. The place is ideal for a one day trip for people looking for an escape from the ordinary and for tourists interested in rediscovering a forgotten legacy. – Article Courtesy: Deccan Herald, Kushal V R