Jogipeta Temple: A fountainhead of the Digambar Jains 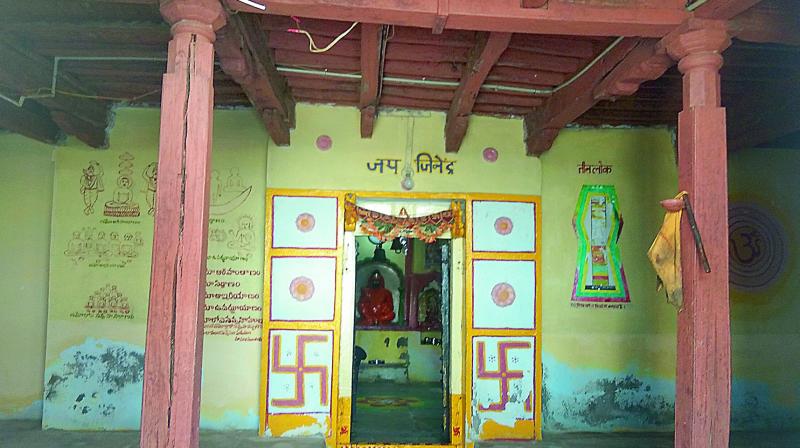 At first sight it looks like an old house. In fact, the lane is filled with such houses with small rooms and smaller windows, leading to dark kitchens. But these houses have survived the tides of time and are endearing in their stability, compactness and charm.

This one is also a house until you see a dust-filled board announcing that it is actually a Jain temple, known as the Sri Ek Hazar Aath Neminath Bhagwan Digambar Jain Mandir, Jogipeta in Medak district.

The main entrance has now been changed and you enter the place through a small garden, with patches of colour where flowers have bloomed. And new construction has made it possible to build three bathrooms, which stand neat and clean within this small plot, all of 600 sq yards.

As you enter through the garden, to go into the house, you are greeted by this vivid orange statue with a black face and silver eyes and he is the guardian of the village. “Manibhadra Swamy,” says Vaskula Satyanarayana Jain, who has been looking after this property and Jain temple for the past 15 years. He is the third generation and has seen his grandfather work at this temple. He does not remember much beyond his grandfather.

The Jain temple was earlier atop a hill, but invaders removed some of the icons and built a mosque in the same place. The mosque still stands there and there are rumours that icons of the Jain temple are still under the mosque and apparently can be reached through a tunnel. There is yet another theory, that during the 16th century, the Veera Shaiva cult had caught the imagination of people and Jainism was on the wane. The Veera Shaiva cult simply took over the Jain temples and placed Lord Shiva icons over there.

A room with a low roof and beautiful wooden rafters greets you. Currently filled with cement, this would be the entrance to the temple. Then comes the courtyard, with a flagstaff and rooms built on either side, which are very recent additions. The courtyard is open to the sky but otherwise the size of a large handkerchief. A very narrow staircase leads to the first floor, with a huge space and a few rooms.

Then you enter another space, large and empty, now being used by devotees who come to listen to the gurus, who visit every once in a while.

This place had a well in the corner, but with no water. They have now covered it and use it as a hall. Then it is that you enter the main sanctum, which is well appointed with light painted walls and a well-lit sanctum, where Neminath Bhagwan sits cross-legged. There are a number of small statues made of marble, pancha loha. In fact, many of them got stolen some 15 years ago.

Neminath Bhagwan is the 22nd Tirthankara.

Jogipeta is a small village, with tiled roof houses still intact. Earlier, several Jain families lived here, but according to Satyanarayana, all of them migrated and now there are only six families living here and it is lucky that Satyanarayana, and earlier his grandfather and father, decided to look after the temple.

Jogipeta is about 35km from Sanga Reddy town and the drive is on a single road, after you turn at the Sangareddy Crossroads, and though busy, it is a charming road, looking more like an avenue with a lot of banyan trees on either side.

As you approach Jogipeta, you cross Andole where there are remnants of a fort, called the Pampad fort, apparently built by Shivaji Maharaj. While driving down to Jogipeta you get to see a huge pillar of the fort. It is definitely different from all the other forts one has seen till now.

Sonnaila Laxman, a professor of history at NMGDC, Jogipeta, proudly says that five of his third-year students wrote a paper, ‘A study of Jainism in Jogipet’, which won the third prize in the state-wide competition. And one of the theories is that this place was a famous Jain centre, considering the number of Jain relics that have been found.

Of these, Kulcharam has really caught the imagination of people and there are several visitors to this new, swank Jain temple.

Satyanarayana is very keen on placing this temple on the religious tourism map, especially for the Jains. He also wants to start a museum. “Alladurg, another village in Medak district, has so many Mahavira icons and other relics of bygone days. I thought it would be nice if everything was brought under one roof and people understood history,” says Satyanarayana.

But there is another reason why the temple is not so frequented.

Thirty-five km from Jogipeta is Kulcharam. It is a straight drive from Balanagar and right on the road is this lovely Jain temple, recently built, with facilities for staying and food on four acres. This is the Ek Hazaar Aath Parshvnath Digambar Jain Mandir. But it is not all new.

The 14-ft statue of Parshavnath was found while some excavations were being conducted. Some people wanted to bring it to Hyderabad but the locals would not allow it and so it was installed here by Devananda Swamy and a temple built around it.

“Earlier, the statue was well-proportioned but when it was found in the excavation it was in a bad shape. It was polished so much, Parshavnath Bhagwan has now become very thin,” says Satyanarayana, who also conducted pujas here for the first three months after the installation, till they found another person to do the same.

Parshvnath Bhagwan is the 23rd Tirthankara.

Now, the daily pujas here are conducted by Abhay Kumar Jain, while his wife Manisha Jain looks after the temple property, including a Goshala. “We get a decent crowd on Sundays, when people come here and stay in the rooms,” says Manisha.

In fact, since so many locals visit the place and they want to follow the tradition of breaking coconuts and touching the feet of God, they have erected a small marble platform with Parshvnath’s feet for people to touch and pray and a separate place for breaking coconuts. Breaking coconuts or taking vows is not practiced among Jains.

The main place of worship for Digambar Jains is Shri Sammet Shikharji, in Jharkhand. Twenty out of 24 Tirthankaras have attained Nirvana here, which is a collection of 20 mountains.