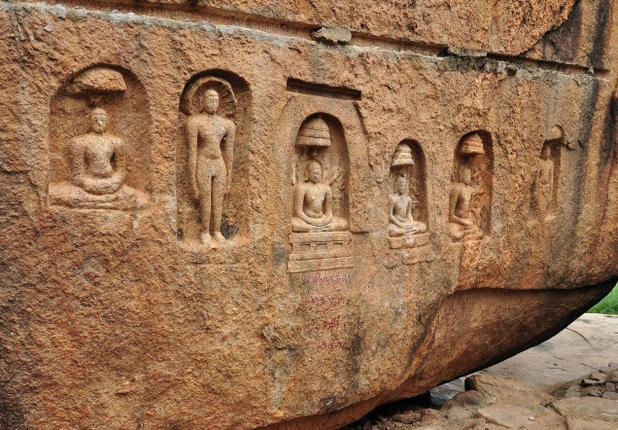 The otherwise serene village of Keelavalavu is often in the news for the wrong reasons, usually simmering caste fanaticism and granite quarrying.

Somehow, the village has managed to preserve the Jain beds that testify to its association with a 2500-year-old religion.

A left turn on the Tirupathur road from Madurai leaves you on a country road that in turn leads to the Jain caves, once the abode of monks and a residential school that dates back to the 2nd century BC.

And the natural cave with uniformly designed rock beds and sculptures of Jain monks has withstood the ravages of time. But now, this 2000-year-old monument faces a threat from mammoth cranes and dynamites.

Though the Archaeological Survey of India is maintaining the monument, the ongoing quarry work in nearby places is certainly posing a threat to the structure, evidence of the rich culture and tradition of a bygone era.

Keelavalavu cave is one of the earliest Jain caves found in and around Madurai.

The cave has a drip-ledge on the brows that keeps rainwater out. On the brow, there are deeply cut rectangular holes that provided space for erecting thatched sheds whenever necessary.

One unique feature of the Keelavalavu cave is the presence of Tamil Brahmi letters which are upside down.

The inscription says that ‘a person hailing from Thondi made these beds.’ “Similar upside-down message is found written at Kundrakudi beds,” says C. Santhalingam, retired archaeological officer. “These letters are deciphered using a mirror.”

In total there are nine sculptures in the cave belonging to 9th and 10th century AD: three in the centre and six on the left side.

The 24th Thirthankara Mahavir is sculpted in a sitting posture (Arthapariyanga asana) and Parsuvanathar is in a standing posture (Kayothsarga asana). There is a sculpture of Bagubali, also known as Gomatheeswarar.

Green, red, yellow and black paint colours the sculptures, and the fresco technique has been used. “Bas relief sculptures are covered with well-ground lime coating. Paintings are drawn on the coating before getting dried,” says Santhalingam.

“These features indicate that Jainism flourished in the 9th and 10th century AD in these areas,” says Santhalingam.

According to Madurai Mavatta Tholiyal Kaiyedu, the Vattezhuthu inscription found here reads that one Sankaran Sri Vallabhan made one of the sculptures, donated 50 goats for lighting a perpetual lamp and served food offerings while performing pujas at the cave.

“The hillock also has some geometrical shapes drawn with red ochre,” says Santhalingam.

“These paintings indicate that the hill might have been a residential area of ancient tribes.”

The other part of the hillock has a 10th century Vattezhuthu inscription referring to Sri Katti and Sri Kaalan Aratti and the grinding stones (kal ural) donated by them.

Perhaps it is not wrong to refer to Melavalavu as Keelavalau’s twin village. Though Melavalavu does not possess Jain caves, it, too, has some remnants from the past.

An inscription (dated 1238–1239) found at a sluice narrates that during the regime of Later Pandya king Maravarman Sundarapandian I (1216-1238), a person named Alwaan Sakkarakaiyan hailing from Kovur worked on raising the bund of the water body. It also reads that the village was known as ‘Parambu alias Narayana Mangalam.’ Another inscription (15th century) dating to the regime of Vijayanagara king Virupaacharayar also confirms the name of the village as ‘Parambu alias Thiru Narayana Mangalam.’

Santhalingam says, “The village was so famous that those days the geographical locations for other villages were marked with the tag ‘parapu’ like ‘vadaparapu naadu’ and ‘thenparapu naadu.” – Article Courtesy: The Hindu, Article by – S.S.Kavitha, Photo – R. Ashok