Wades were the erstwhile epicenters for administration in North Karnataka and parts of Maharshtra that evolved during the rule of Bijapur Adilshahis and continued till the end of British rule. This article will explore the concept of Wade, Wade Tradition, the North Karnataka’s oldest Jain Wade, its association with the well known Kannada poet Adikavi Pampa and its uniqueness.

India is a vast country and equally vast are its diversities. The diversities unveil as we travel through the length and breadth across the country. The diversities vary from region to region in terms of food, customs, traditions, rituals, dress, language and many others. One such unique thing is the ‘Wade’, the erstwhile epicenters for administration in North Karnataka and parts of Maharshtra in the area that came under the rule of Bijapur Adilshahis. In this article we will explore the concept of Wade, the world’s oldest Jain Wade, its association with the well known Kannada poet Adikavi Pampa and its uniqueness.

The Wades trace their origin to the period of Bijapur Adilshahis. The Adilshahis for the ease of administration divided their kingdom into 12 divisions called as Pranthya or Subha. They started calling these as Sarkar or Jilla in the later days. Under each Subha came various Paragana. These people who held the position of administrative heads were called as Gowda, Nadagowda and Desai during the period of Rashtrakuta, Chalukya & Hoysala period. During the Adilshahi regime head of these Paragana’s were called as Mamalaedhara, Desai, Deshpande, Nadagowda, Nayak, NadKulkarni, Gadimalak, Deshmukh and other names based on their religion. The work of these administrative heads was to collect the taxes received from the farmers and pass these on to the king. All other administrative powers of the Paragana rested with them. As a token of appreciation to their honesty many times there are instance of the Adilshahi kings granting hundreds of acres of lands to the administrative heads as Inam (meaning prize) lands. Hence the Mamaledhara / Deshapande turned out to be the local rulers. These Mamaledhara / Deshapandes started building huge luxurious houses spread over several acres of land on the lines of the palaces of Kings. These were called as Wade. In short a Wade was a wide place of stay for the local ruler in this region. Further, these were also administrative centres, place of durbar and a place with protection for the local rulers. The Wade tradition existed during the regime of Bijapur Adilshahis, Marathas, Peshwas, Sangli Patavardhans and British rule. As already mentioned these existed in Northern parts of Karnataka and parts of Maharashtra. Even to this day we can see many such Wades  in this region.

Some Interesting Data related to Wades in Karnataka & Maharashtra

There were many Wades owned by the Jains, some of which were converted over a period of time to different religions owning to various local factors. Currently there are 5 such Jain Wades in North Karnataka at the below mentioned places –

Ruined Jain Wade – There is another ruined Jain Wade at Tirtha – 10 Kms from Terdala. Half of it is fallen. It belongs to the Terdala Wade and was their Besige Mane (place of stay for the entire family during the outbreak of some diseases).

Structure – Its main entrance is east facing and its SadaraKatte (the main area of the Wade where political deliberations of the region were held) is north facing. It has grown further towards its northern side. It has high raised wooden pillars with two balconies for women in the family to have a glimpse of all the religious and cultural proceedings in Sadarakattte. The balconies have doors and attractive carvings all around. After Sadarakatte is seen the Rajangana (the main area where head of the Wade conducts his Darbar). Rajangana further leads towards different doors leading to Karakoon’s  (accountant) room, store room, guest room, records room and padasale (hall or current drawing rooms). Padasale has doors connecting the bedroom, records room, Belliya tottilu kone  (room for women after giving birth to babies), pooja room and door towards the backyard. On the way to backyard are the bathroom, water well and a door leading to underground secret room. Further, there is a small secret window from the bathroom from which one can view the main entrance of Wade. 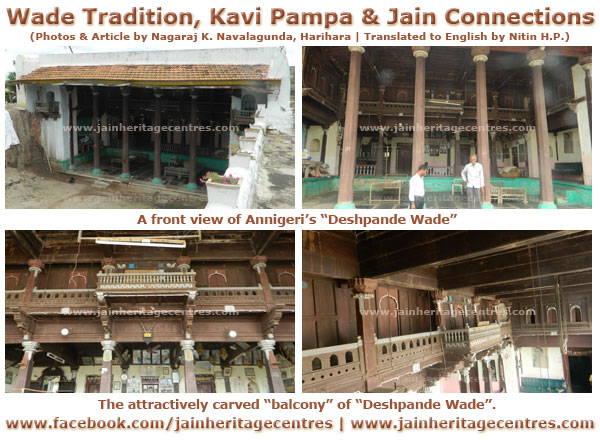 Room for Jain Tyagis – One other uniqueness of this Wade is the presence of Tyagi room. It is attached to the inner padasale and is spread over an area of around 30X40 feet. This room has been constructed exclusively for the Jain ascetics (tyagi) who visit Annigeri. This is place for them to stay, have ahara (having food) and Pravachana (religious discourses) and is connected to the pooja room. Construction of an exclusive room for the tyagis indicates the devotion of this family towards Jainism.

Pampa & Annigeri Deshpande Connections – Pampa one of the doyens of Kannada literature who lived during the 10th century is said to belong to the ‘Annigeri Deshpande’ family. Renowned Jain scholar Prof. G.Brahmappa has established this fact. Many other research scholars like Dr. Hampa Nagarajaiah, Dr.M.Chidananda Murthy and Dr.M.M.Kalburgi concur with this fact. Pampa’s father was ‘Bhimappaiah’. The usage of this name repeatedly to the kids born in this family provides a substantial evidence that Pampa belonged to this family. However, he was born at Annigeri as his mother Abbanabbe belonged to this place. Further, Bhimappaiah also originated from Annigeri and Dr.Chidanandamurthy has established the fact that members of Pampa’s family are still living in Annigeri. History says that the Vengi Chalukyas had invited Pampa’s family members to Vengi Mandala as a result of which Pampa also spent considerable period of his life time at Vengimandala in the current Karimnagar district of Telangana.

Pampa has mentioned that he has used the local language of Annigeri region in his works ‘Adipurana’ and ‘Vikramarjuna Vijaya’. Impressed by his literary erudition King Arikesari had invited Pampa to his kingdom and felicitated him. All throughout Pampa’s family were pretty well off financially and might have led the way for getting ‘Desagati’ (administration of the region) from the Bijapur Adilshahis.

Patronage to Jainism – Along with their connection with Pampa the Annigeri Deshpande family has always been on the forefront in patronising Jainism. A couple of inscriptions at  Annigeri substantiate this fact. An inscription of A.D. 1762 states that Shugappa of Annigeri’s Deshpande family renovated the Shanthinath Jain temple at Annigeri. Further, another inscription of A.D. 1867 states that Smt Pushpavati  Bai wife of Bhimappaiah Deshpande had donated the Parshwanth idol to Shanthinath temple in Annigeri under the presence of His Holiness SwastiSri Lakshmisena Bhattarakh Swamiji of Kolhapur Jain Mutt. Further, records state that Pushpavati  Bai had also made donations to Humcha & Shravanabelagola Jain Mutt. She was also know for making numerous donations for conducting various Aradhanas and Vidhanas at various Jain temples in the region.

Religious Tolerance – One other inscription states that the Annigeri Deshpande family had donated lands for a Veerashaiva/Lingayat mutt at Dambala (in Gadag district). This is an indication of their religious tolerance. Even to this day many festivities like Navarathri,  Moharam and many other festivals are celebrated at Annigeri in the presence of Deshpade family.

Like the Deshpande Wade at Annigeri other Wades have been the epicentre of administration and the families that ruled the region apart from administering the region also contributed substantially to the overall development of this region. The Jain families owning the Wades patronised Jainism along with other religions.

Please watch out this space for another article related to the other Jain Wades of North Karnataka and their Jain traditions.

The author Nagaraj K Navalagunda is perusing his doctoral thesis in the subject “North Karnataka Jain Wades” at the folklore department in Kannada University Hampi under the guidance of Dr.Manjunath Bevinakatti.