Home » Jainism » Articles » How did Jainism spread in South India? A small town in Tamil Nadu holds the answer

How did Jainism spread in South India? A small town in Tamil Nadu holds the answer

For the marginalised Tamil Jain community, Kazhugumalai is of great religious significance. 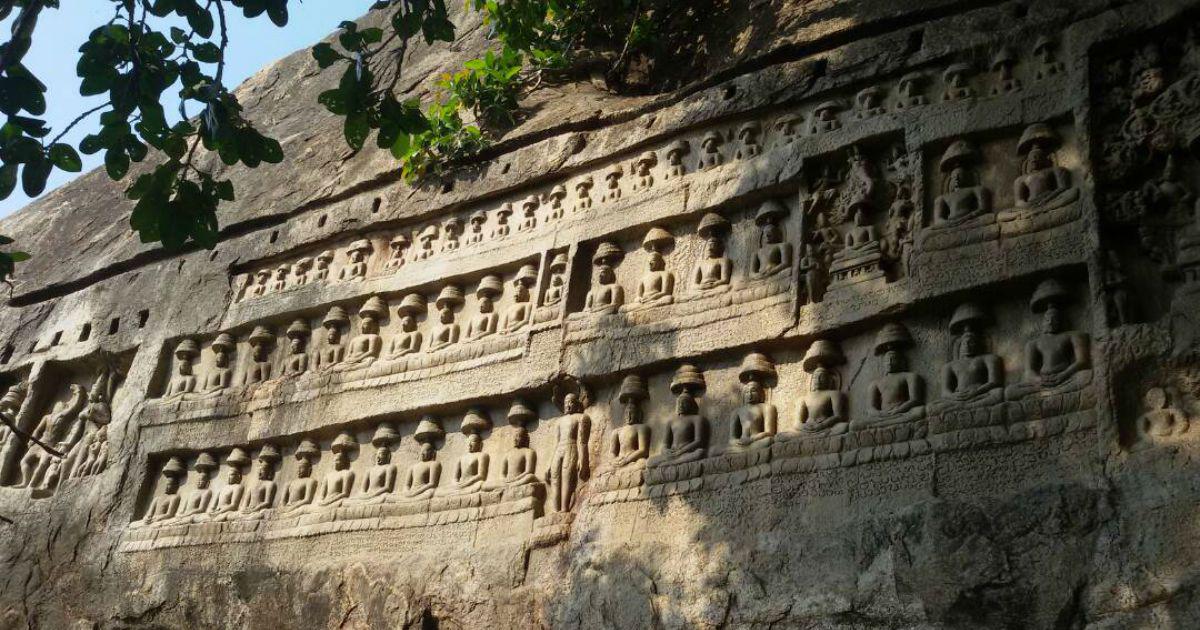 The hillock rises along a long-forgotten trade route, one boulder piled atop another with seeming disregard to the rules of gravity. The town of Kazhugumalai (also spelt Kalugumalai) in Thoothukudi district anchors itself on three sides of this hillock, amidst large swathes of rural Tamil Nadu, which once bustled with merchants and pilgrims.

The ascent looks uninteresting from across the pond at the foothills. As one begins the steep uphill climb though, things rapidly change and images from the past leap out, forming a jigsaw puzzle. A large gallery of bas-reliefs of Jain tirthankars appears on the right side of the hill. Carved between the 8th and 12th century, these bas-reliefs are at such height on the boulder that their very existence seems surreal. High above, rows of tirthankars sit in meditative postures. Some parts of the relief break away from this motif to illustrate stories of Jain yakshas and yakshis (protector gods and goddesses).

“I cannot put in words how important this site is to Tamil Jains,” said Kanaka Ajithadoss. 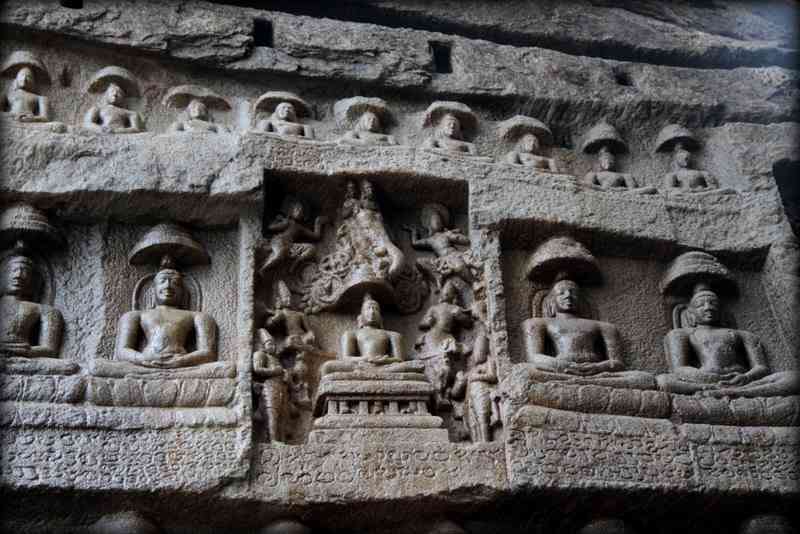 Professor Ajithadoss belongs to the minority Tamil Jain community, of which there are 25,000-30,000 members left in Tamil Nadu. Distinct from North Indian Jains or their descendants in the region, Tamil Jains trace their roots to the first millennium CE when Jainism and Buddhism were widely followed in South India. Many Tamil Jains today are poor and marginalised, living in small pockets of northern Tamil Nadu. Why then is Kazhugumalai, in the deep south of the state, with no Tamil Jain population nearby, of such significance?

While the region is dotted with several Jain sites, Kazhugumalai has the largest collection of Jain inscriptions South India. These 102 inscriptions provide information on the donors who had commissioned the statues and the panels of the tirthankars, including lists of kurathars and kurathis (male and female teachers and ascetics) and the ruling years of various kings who supported Jainism. Only one inscription is in Tamil, while the rest are in Vattezhutu, an ancient version of the Malayalam script derived from Brahmi. 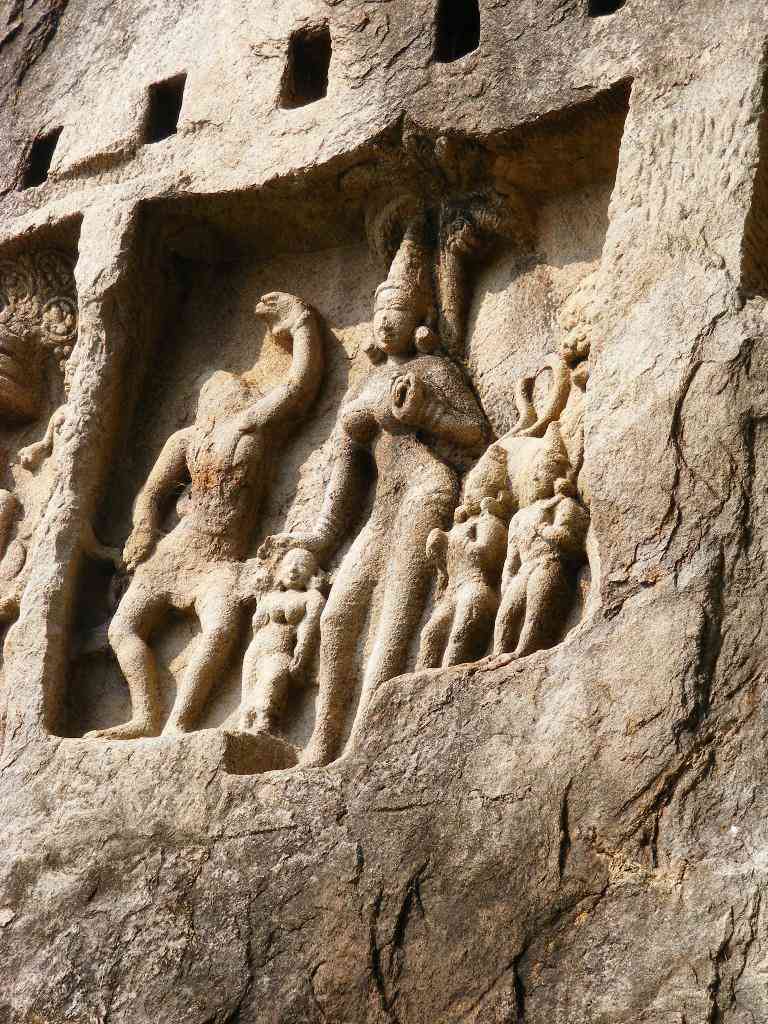 “There is a wealth of information about the spread of Jainism that can be found at Kazhugumalai,” said Ajithadoss.

While it benefited from its presence on a trade route, Kazhugumalai was also a Jain monastery. Some inscriptions point to the presence of at least 15 female teachers and nuns between the 8th and 12th century. The date of the institution of the monastery is unknown – as per early Pandyan records, it was at least as far back as the 9th century CE.

V Vedachalam, a retired senior epigraphist of the State Archaeological Society, says the inscriptions reveal that the Kazhugumalai palli (monastery) flourished for around 350 years, but just like its inception, its downfall is shrouded in mystery. 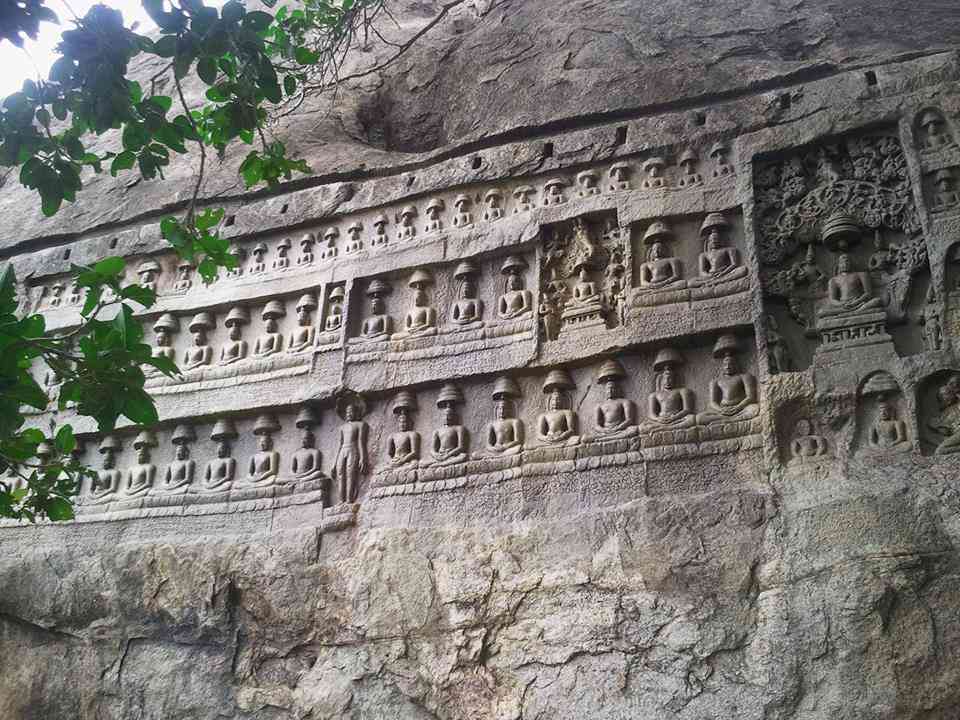 A similar mystery clouds the Vettuvan Koil, a Shiva temple on the other side of the hill. After climbing eastward on the gently sloping hillock, the Vettuvan Koil, known as the Ellora of the South, emerges from a fenced pit. The unfinished 12th century monolithic temple, which historian C Sivaramamurthi compared to the ones at Mahabalipuram, sits magnificently on the eastern edge of the hill. And like its counterparts in Mahabalipuram, this temple too is bereft of worshippers.

Questions like how the temple was built, by whom, and for what reasons – considering its proximity to the Jain site, and the animosity between Saivites and Jains – remain answered.

Locals belonging to different faiths will each stake their religion’s role in making Kazhugumalai sacred, but academic rigour has proven otherwise. There is a pattern, as observed in many other Jain sites in South India. Kazhugumalai’s past is written from the same ink and follows a familiar trajectory. 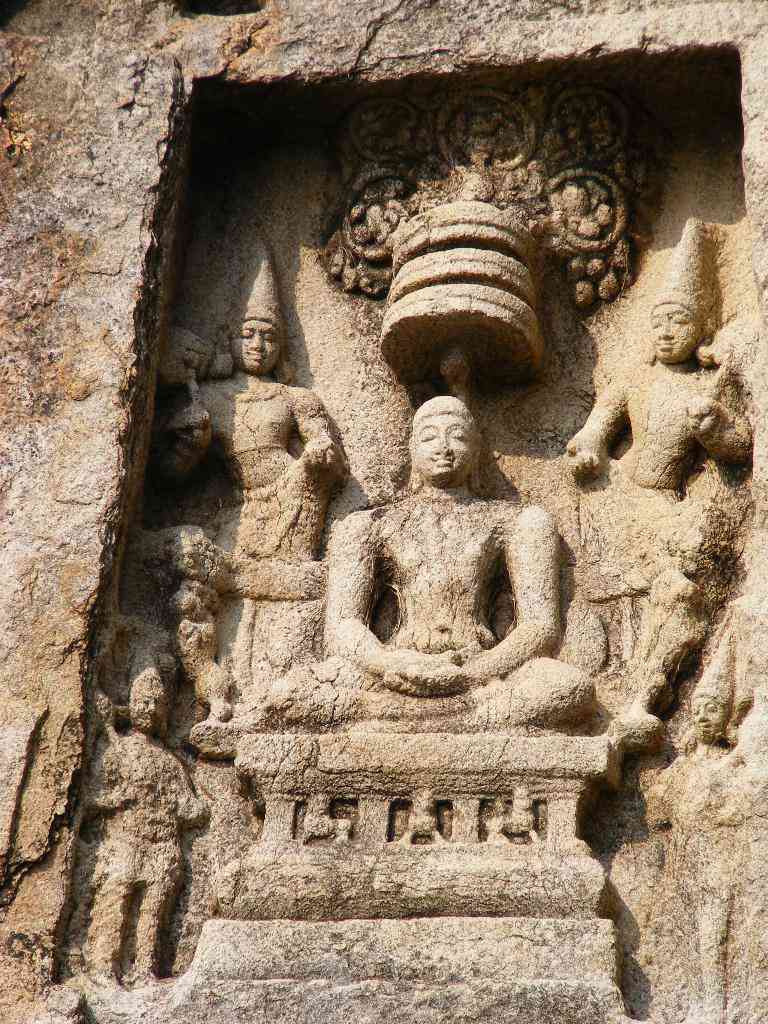 Over the past century, numerous colonial records and research articles have explored various facets of Kazhugumalai. It was the subject of at least three archeological surveys before independence, and since then, several scholars, epigraphists and archeologists have examined the site or written of its importance.

Kazhugumalai (called Tirmalai, Tiruneccuram and Araimalai at various points) was active for nearly 500 years, starting from the 8th century. Agriculture was the main occupation in this perur (a village of more than 500 families). But given its location on a key trade route and its proximity to Madurai, the capital of the Pandyas, it was a bustling centre of social, political and religious activity.

The period between the 6th and 12th centuries is widely regarded as a period of transition in the region when equations involving religion and power were rapidly evolving. Notably, it marked the decline of Jainism and Buddhism and the entry of the Cholas. Until then, the two religions had had a large following among the laity, and even among members of the Pallava and Pandya dynasties. 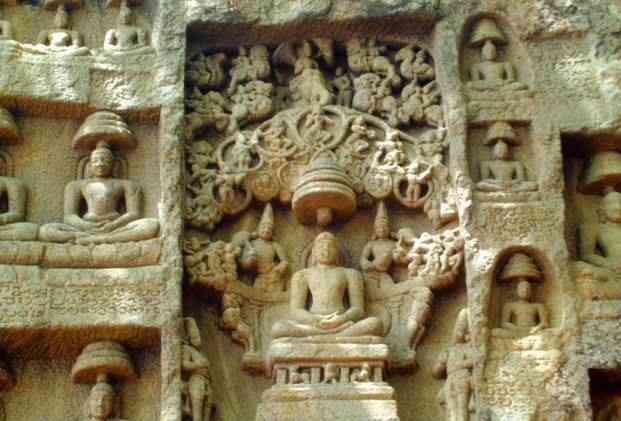 The story of the conversion of Kun Pandya (670-710 CE), a patron of the Jains, by poet-saint Thirugnanasambandar to Saivism is considered a watershed moment. Once the ruler was converted, the story goes, the masses followed in large numbers. This inflamed the animosity between the Jains and Saivites, with the mantle of hegemony transferred from the former to the latter. The Saivites, as mentioned in many texts written in the medieval period, reigned supreme and continued to persecute Jain ascetics. Whether such a conversion directly affected the residents of Kazhugumalai isn’t certain. But given Kazhugumalai’s position on a vital trade route, the king’s conversion would surely have affected the Jain monastery.

However, the basic facts of the site contradict general perceptions of the decline of Jainism in the region. Scholars have called this an oversimplified narrative that relegates the Tamil Jains to a distant past. In this story, the Jains (and the Buddhists) were present for some years in Tamil society until the Bhakti movement grew popular in the 7th-8th century CE and the kings were converted to Saivism. Under constant persecution and conversion, the Jain community was suppressed and forgotten. 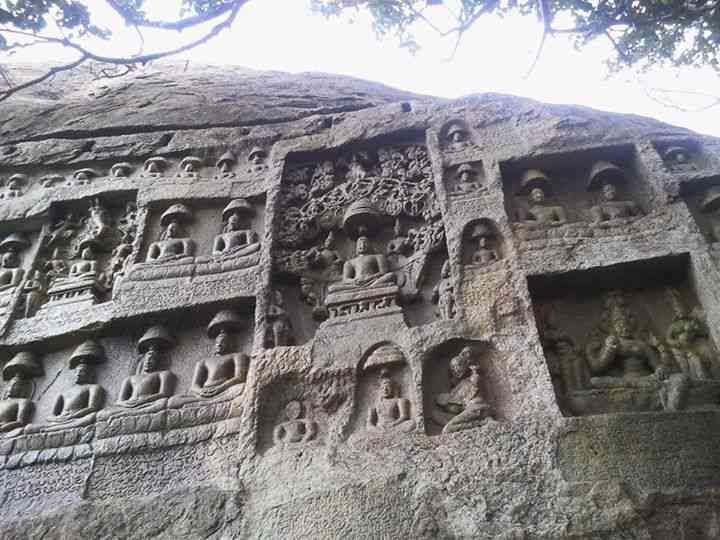 Such narratives compress timelines and flatten socio-economic and cultural complexities. Scholars point out that this also assumes Jainism and Hinduism to be cohesive with fixed traditions, doctrines, and practices, thereby de-emphasising the continued presence of Jainism in Tamil Nadu.

Furthermore, the Jain reliefs and palli in Kazhugumalai appeared only after the start of the Bhakti movement, which according to the standard narrative, saw the near eradication of Jains. The fact that this site continued to be in existence till the 12th century shows us how gradual the decline actually was and provides us with new lines of questioning.

It also puts it into perspective the reason for the need to understand Kazhugumalai, and the community’s efforts to protect and promote it. The fact that the Tamil Jains were never completely defeated and continue to exist in small pockets of rural Tamil Nadu as well as some cities makes the story of the lost Jains even more problematic.

“We may not be visible in the public sphere today but Tamil Jains have contributed a lot to the literature and culture of the region,” said Rajendra Prasad, a Tamil Jain from Chennai.

Their contribution to literature is widely known – three of the five great Tamil epics, and many smaller works, were written by Jains. Sites like Kazhugumalai are a testament to their artistic and architectural feats, attesting to Jainism’s popularity among the laity.

Ajithadoss has been promoting Kazhugumalai among Tamil Jains and working towards putting it on their pilgrimage map. In recent years, many Tamil Jains have visited the place and offered their prayers. But for Ajithadoss and others, it will be a long road, given the neglect, vandalism and encroachment of the site over centuries.

One encroachment is of the Ayyanar temple, right next to the Jain panels, which was supposed to be protected by the state archaeological department. “This is a pattern in many Jain sites across Tamil Nadu,” said Ajithadoss. “We are too few in number and we cannot protect our sites, and temples of local deities have cropped up in many of sites.” 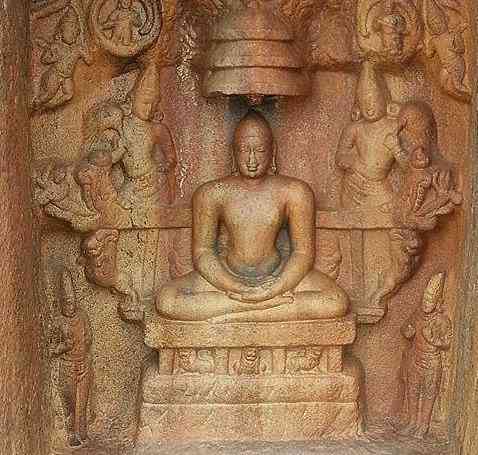 One common refrain in the community is that the few people who know their history seem to recall nostalgically the Jains’ contribution to Tamil culture, but almost everyone else has forgotten of their existence. For the ignorant and the nostalgic, Kazhugumalai’s variegated canvas is a humbling lesson on the social and religious complexity of the past.