Inscription on the last Jain temple in Telangana found 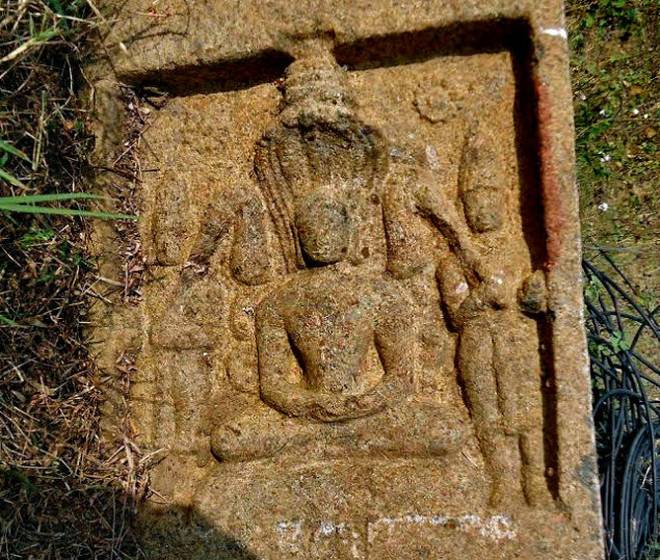 A three-faced stone inscription examined by a historian, Dyaavanapalli Satyanarayana, in Mallaram of Malhar mandal in Karimnagar district appears to indicate that it was indeed the last Jain temple in the region, also pointing out the patronage of the religion, 850 years ago.

When deciphered, the inscription in Sanskrit and Telugu languages narrate how a temple for the 24th Jain Thirthankara, Sri Vardhamana Mahaveera, was constructed by one Manikya Setti and also how the revenues of an entire village called Muppayapalli was donated by Bhaktula Pochenayudu for its maintenance.

Interestingly, farmers of Mallaram found the stone as they were clearing shrubs to reclaim land, eight years ago. More recently, Chepyala Madhusudhan Rao, an elder in the village, brought it to the notice of the historian and thus its importance was recognised. Mr. Satyanarayana said he had corroborated its contents with facts in contemporary historical texts and thought it fit to reveal the findings.

The inscriptions have several contexts in the chronicles of the history of Telangana, says the historian. It is the last inscription discovered thus far, throwing light on the construction of a Jain temple in Telangana. Then it demarcates a line for the disappearance of Jainism and being replaced by a new religious sect called ‘Veera Saivism’ here. Also, it indicates the predominance of the Setti community (Komati today) among the Jains in those days.

Mention of a lady, Giri Devasani, in the inscription indicates the value that was given to women in those days. She is said to have succeeded her father Doddalasiddhi Setti as the chief priest of the Parshavanatha temple, whose sculpture is found, apart from the Kakatiya symbols of the ox and the sun-moon on all four sides of the stone. The mention of the lady, Dr. Satyanarayana said, revealed that women in the Jain faith held high position in their society.