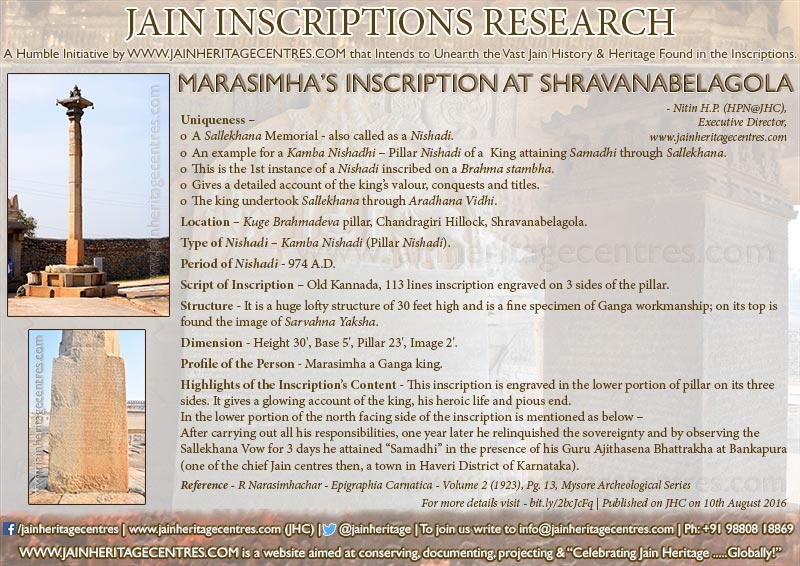 Script of Inscription – Old Kannada, 113 lines inscription engraved on 3 sides of the pillar.

Profile of the Person – Marasimha a Ganga king.

Highlights of the Inscription’s Content – This inscription is engraved in the lower portion of pillar on its three sides. It gives a glowing account of the king, his heroic life and pious end.

In the lower portion of the north facing side of the inscription is mentioned as below –
After carrying out all his responsibilities, one year later he relinquished the sovereignty and by observing the Sallekhana Vow for 3 days he attained “Samadhi” in the presence of his Guru Ajithasena Bhattrakha at Bankapura (one of the chief Jain centres then, a town in Haveri District of Karnataka).

Summary of the Inscription – This inscription gives an elaborate account of Marasimha’s achievements and records his death at Bankapura by the Jaina rite of sallekhana, or starvation. It states that Marasimha, who had the title Satyavakya-Kongunivarma-dharma-maharajadhiraja, became known as the king of the Gurjaras by his conquest of the northern region for the Rashtrakuta king Krishna III; that he broke the pride of Alla, a powerful opponent of Krishna III; that he dispersed the bands of the Kiratas dwelling on the skirts of the Vindhya forests; that he protected the army ofthe emperor (Krishna III) at Manyakheta (Malkhed in the Nizam’s Dominions); that he performed the anointment of the Rashtrakuta king Indra IV ; that he defeated Vajjala, the younger brother of Patalamalla; that he captured all the possessions, including jewels, elephants, etc. of the ruler of the Vanavasi country; that he received obeisance from the members of the Matura family; that he destroyed all the Nolamba kings in war, which circumstance gave him the distinctive title Nolam bakulantaka or a Yama to the Nolamba family ; that he took the hill-fort of Uchchangi which had proved impregnable even to Kaduvatti; that he killed the Sabara leader Naraga ; that he defeated the Chalukya prince Rajaditya; that he fought and conquered in battles on the banks of the Tapi, at Manyakheta, at Gonur, at Uchchangi, in the Banavasi country, and at the fortress of Pabhase; and that he maintained the doctrine of Jina and erected basadis and manastambhas at various places. The record closes with the statement that he relinquished the sovereignty, and keeping the vow of Sallekhana for three days in the presence of Ajita-bhattaraka, died at Bankapura (in 974). A good number of titles is applied to him, among which may be mentioned Ganga-chudamani ( the ciest-jewel of the Gangas), Nolambantaka (destroyer of the Nolambas), Guttiya-Ganga (the Ganga of Gutti), Chalad-uttaranga (the lintel of firmness of character), Mandalika-Trinetra (a Siva among chieftains), Ganga- Vidyadhara, Ganga-Kandarpa, Ganga-Vajra and Gangara-singa (the lion of the Gangas).