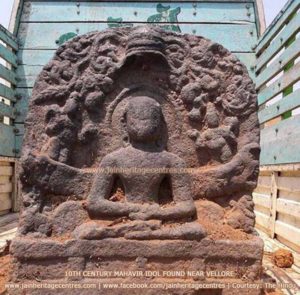 Vellore (Tamil Nadu), April 29, 2017: A stone sculpture of Mahavira dating back to the 10th century was found on an agricultural land at Thuraiperumbakkam near Kaveripakkam on Saturday.

K. Saravanan, curator of Government Museum, Vellore, was informed. Based on the photographs of the sculpture, he said it was the sculpture of Mahavira, the 24th Tirthankara. “Usually, such sculptures belong to the Chola period that is the 10th century. This is at least 1,000 years old. I am told that this sculpture is about three-foot high,” he said.

As per the Indian Treasure Trove Act, 1878, the officials of the Department of Museum would take a look at the sculpture and take steps to bring it to the Government Museum, Vellore.

“Already, the Vellore museum has sculptures of nine Jain Tirthankaras that were found in various parts of Vellore and Tiruvannamalai districts. If this latest sculpture is brought to the museum, it will be the 10th one,” he said. – News & Image Courtesy: The Hindu