It is engraved on a boulder in which a drip-ledge has been cut and beds excavated on the rock floor for Jaina monks to rest. 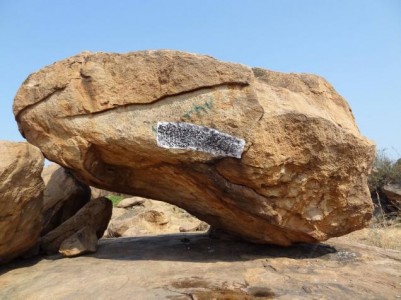 Chennai (Tamil Nadu), March 25, 2012: A Tamil-Brahmi inscription that pushes back the association of Samanamalai (“Jaina Hill”), 15 km from Madurai, with Jainism to 2,200 years, has been discovered on the hill. Although scholars in Jainism in Tamil Nadu know the existence of bas-relief sculptures of tirthankaras and Tamil Vattellutu inscriptions on the Samanamalai, both datable to 9th-10th century CE, what has surprised them is the recent discovery of the Tamil-Brahmi script on a boulder on the hill’s terrace. The script is engraved on the boulder in which a drip-ledge has been cut and beds excavated on the rock floor for the Jaina monks to rest.

Iravatham Mahadevan, a scholar in Tamil-Brahmi script, called it “a good discovery of genuine importance” and said he was “surprised that it has been overlooked for such a long time.”

Different interpretations of the newly found script have been given by specialists in Tamil-Brahmi. Mr. Mahadevan, who read it as “Peru Thorur Kunra Ko Ayam,” said it recorded the gift of a mountain pool/spring by the chief of the hill at a place called Peru Thorur. He said: “It is clearly an inscription with Jaina affinity because you can see the drip line cut above the inscription, which is carved on the brow of the rock. The letters are very archaic and they are tall and narrow. They belong to the Mankulam and Arittapatti [both situated near Madurai] style of Tamil-Brahmi inscriptions. The archaic nature of the Samanamalai script can be seen from the spelling of the word ‘ayam,’ which means a mountain pool of water or spring.”

Dr. Y. Subbarayalu, Head, Indology, French Institute of Pondicherry, and Dr. Vedachalam have read it as “Peru Tho Ur Uzhithegne Ayam.”

According to Dr. Subbarayalu, the word “ayam”, besides occurring at Samanamalai, had been used in the Tamil-Brahmi inscription at Mudalaikulam, about 10 km to the west of Samanamalai. “We can call ‘ayam’ a spring or a cave. The Mudalaikulam inscription uses the word ‘Perayam’, which means a big tank. There is more of a possibility to call it a cave,” Dr. Subbarayalu said. There were chances of obtaining different readings for the Samanamalai script. For instance, “The Ur” could be read as “Tho Ur.” The word “Uzhithegne” could be a personal name, he added.

In Dr. Vedachalam’s interpretation, the script refers to an “ayam” dug by a man called Uzhithegne of Perunthevur. Specialists had argued that the word meant a water tank (“Kulam” in Tamil). “Ayam” could also mean a “crater” (“pallam”). A water tank did not fit into the context of where Jaina monks stayed, the Senior Epigraphist said. So “ayam,” in the Samanamalai context, could refer to the drip-ledge cut on the rock’s brow or the beds cut on the floor. Thus the word “ayam” established that it was a place where the Jaina monks stayed, Dr. Vedachalam said. “Perunthevur” could have existed near where the inscription had been found. Both “Uzhithegneyan,” the name of a person, and “Thevur”, the name of a village, belonged to the Tamil Sangam age.

Dr. C. Santhalingam, former Archaeological Officer, Tamil Nadu Department of Archaeology, called it “a remarkable discovery which pushes back the association of Jainism with this hill to more than 2,200 years.” He read it as “Peru Te Rur Kuzhiththai Ayam,” which meant these rock beds were carved by the villagers of Peru Therur. The word “Therur” could be read as “Thenur” because the fourth letter in the script looked like the dental “nu”. Thenur, now located near Sholavandan in Madurai district, found mention in the Sangam texts, Dr. Santhalingam said.

Kuzhiththai meant dug out or excavated. Ayam meant rock shelter or bed. Ayam was the corrupt form of “ayanam” or “sayanam.” – News & Image Courtesy: The Hindu