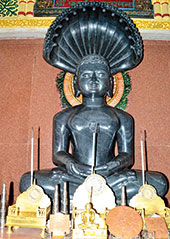 The empty thrones of missing Jain idols at Bokaro Temple

Bokaro Steel City (Jharkhand), March 23, 2012: A nearly three-decade-old Jain temple in the heart of Bokaro steel city was robbed of three ashtadhatu idols and 13 silver parasols — approximately valued at around Rs 12 lakh — in the small hours of Thursday.

The daring incident is a grim reminder of the desecration of idol and theft at the centuries-old Rajrappa temple in Ramgarh district, which triggered a wave of resentment and security tizzy in the state in July 2010.

Sources at the Sri Digambar Jain Mandir, which is situated on NH-23 in Sector II-D of the steel city, said the culprits had taken away the 13-inch-tall idol Lord Parshwanath and 11-inch idols of Lord Mahavir and Lord Shantinath. All the three ashtadhatu idols were plated with gold and studded with diamonds.

The silver parasols, on the other hand, were of different sizes (three big and rest small) and together they weighed around 3kg.

President of Digambar Jain Samiti Mahendra Kumar Jain said the idols were on their respective singhasans (thrones) at 8pm on Wednesday, when the aarti was performed. The gate of the temple was closed after that.

The theft was first noticed around 4.30am by the temple’s 54-year-old caretaker Ram Dular Singh, who has been staying on the premises with his family for 26 years.

Singh, as is his routine, woke up before dawn to clean the temple premises only to find a window grille in the main hall dismantled. He found a screw driver on the floor and the three idols missing, and reported the matter to founder member Indra Chandra Jain. The latter informed police.

Sri Digambar Jain Mandir, which attracts a daily footfall of 500-odd devotees, was built in 1983. The stolen idols were, however, ferried in 1992 from Jaipur in Rajasthan.

President of Bokaro Chamber of Commerce Sanjay Baidya said the thieves left behind a few silver worshipping tools, but cleaned out the idols, hurting the sentiments of the Jain community as a whole.

Octogenarian founder-member Indra Chandra said he had lost appetite ever since he came to know that the idols of his three lords were missing.

“Lord Mahavir, Parshwanathji and Shantinathji were like the heads of our family (read Jain community) who we have lost. We made this temple brick by brick. How happy we were when the idols were brought from Rajasthan. Please bring them back,” the 84-year-old urged police.

Coal Belt DIG Laxman Singh, Bokaro SP Kuldeep Dwivedi and Intelligence Bureau officers rushed to the spot in the morning for investigations. A sniffer dog was also pressed into service.

Dwivedi said policemen had been sent to different places for probe, while exit and entry points to the district was under strict surveillance.

Two elderly devotees — Indira Jain and Malti Jain — told that they had been seeing two new persons at the temple for the past two days. “They came once the men left the temple after morning prayers and stayed on for more than hour. We do not know whether they are guilty, but they looked suspicious,” one of the women said.

Meanwhile, calls are pouring in from all over the country, with Jain devotees wanting to know whether the culprits have been arrested and the idols found. – News & Image Courtesy: The Telegraph