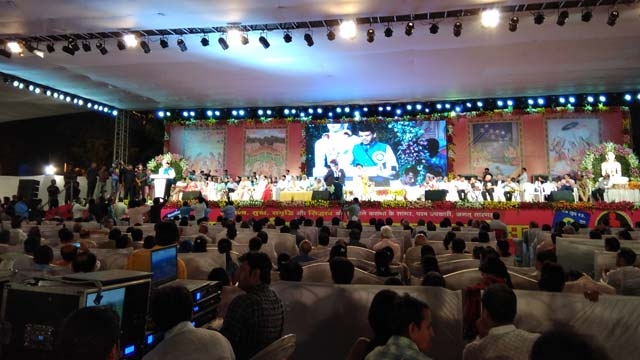 Mumbai (Maharashtra), April 10, 2017: Naypadmasagar Maharajsaheb, an influential Jain monk on Sunday on the occassion of Mahavir Jayanti celebrations claimed that abattoirs were the cause worldwide for nature’s wrath including Tsunami. He was speaking at the festival organised by his organisation Jain International Organization at August Kranti Maidan which was also attended by chief minister, Devendra Fadnavis.

“All the problems in the world related to nature are happening due to violence and running if abattoirs. These can stop when abattoirs stop…. Someone said that when meat has so much strength, what do I say it should Not be eaten, my reply was that egg has 12 percent protein while ground nut has 22 percent,” said Naypadmasagar to a gathering of nearly 1000 people.

Fadnavis who spoke later first thanked the Jain Sadhu for his “blessings” for the civic elections that made possible his party winning the number of seats it did.

“You continue to support us and we promise that the way shown by Lord Mahavir on protection of environment will be kept in kind,” said Fadnavis.

The celebrations also saw a slew of announcement and benefits for the Jain community.

Among them were two new schemes related to policy and medical benefits. The two new schemes are ‘Motor Vehicle Policy and ‘Wellness Plan’. “In the motor vehicle policy, Jains will get a discount of 60 to 75 percent on the premiums,” said Naypadmasagar Maharajsaheb, who founded JIO. The policy is a tie up between JIO and New India Assurance.

There are already policies on medical insurance, mobile and even loan schemes that are being given by the community to its members.

The other policy looks to provide aide to Jains who have to buy expensive medicines. “They will get benefits and can buy medicines that sometime range in lakhs of rupees,” said Naypadmasagar.

Another scheme was announced for marriages. The Sadhu said that Jains in Andherinhad made provisioning marriage functions to be completed at expense of Rs 1.10 lakh with 200 invitees.

The celebrations was attended by a number of people and dignitaries that included some judges from different high courts, IAS and IPS officers. – News & Image Courtesy: DNA India