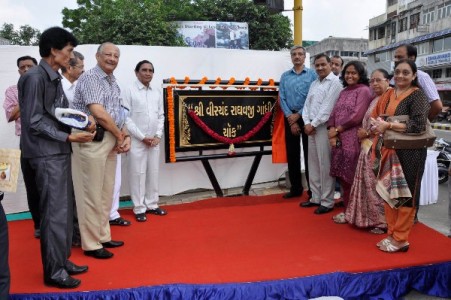 Dr. Kumarpalbhai spoke on the life of VRG. A booklet on  VRG was released by Mayor .
Shri Rakeshbhai Shah – MLA  also spoke about the role of Government in encouraging
such Naming Ceremonies.  Hon’ble Mayor spoke  of the process at Corporation and how happy and lucky he was associating himself with such an event.  Shri Chandreshbhai spoke about how VRG name was  given  as “Virchand”. Shri   Maheshbhai proposed a vote of thanks .  Memento consisting of 4 (four) books :

This was followed by Naming ceremony of the Chowk by Hon’ble Mayor in the presence of dignitaries followed by light snacks. – News Courtesy: Pankaz Hingarh