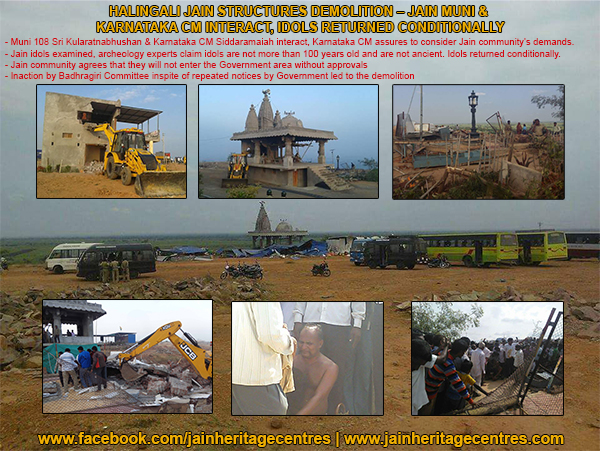 Rabakavi Banahatti (Bagalakote District, Karnataka, India), December 4, 2015: The Jain idols that were confiscated by the Bagalkote district administration at Badragiri Hillock in Halingali have been returned to the Jain community. The Bagalkote district administration had demolished Jain temple and other religious structures at Badragiri hillock of Halingali village citing they were illegal constructions on a Government land, as a protest to this members of Jain community had under taken a protest under the leadership of Muni 108 Sri Kularatnabhushanaji Maharaj. The Muni was on fast unto death and demanded that the government restore the structures to what they were earlier and return the idols.

The Bagalkote district collector P A Meghannavar tried pacifying the protestors and the Jain Muni. However, every attempt went futile until the Karnataka chief minister (CM) Siddaramaiah interacted with the Jain Muni on phone. Since the election code of conduct for the upper house of Karnataka legislative council is in place the CM mentioned that he cannot give any specific assurance. However, he assured that he is ready to discuss the matter in detail and consider their demands after the election code of conduct is revoked.

Sri Kularatnabushanji mentioned that the CM of Karnataka requested him to withdraw his fast. Responding to the CM’s request the Jain Muni mentioned that he will take a decision after his discussion with the members of Jain community.

“Since the Jain community claimed that the idols were ancient the district administration wanted to verify the veracity of claim and had asked the archeology experts to examine the idols. On examining, the archeology experts opined that none of the idols were older than 100 years and will not fall under the purview of The Antiques and Art Treasures Act”, said the district collector.

Inaction by Badhragiri Committee inspite of repeated notices by Government

An official from the district revenue department who did not want his name to be disclosed said that, “The government of Karnataka had served 11 notices to the Badhragiri Committee in the past 3 years and once the assistant commissioner of Jamakhandi taluk has served the notice to the Committee in person with police protection. The notices stated that the religious constructions at Badhragiri were illegal as the land belonged to the Government and the Government indicated to the Committee to vacate the premises. However, there has been no response from the committee inspite of repeated reminders  and hence the Government had to carry out the demolition drive”.

It can be recalled that a Jain temple and a group of religious structures belonging to the Jain community has been demolished at Badhragiri hillock in Halingali village by the district administration of Bagalkote on December 2, 2015. The demolition drive had been taken up by the tashildar of Jamakhandi taluk based on the directions from collector of Bagalkote district stating that they were illegal constructions on a Government land.