Besides demanding changes in the play, the community asks playwright and director not to deviate from original texts. 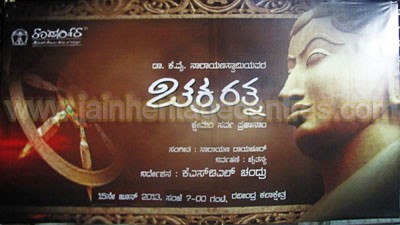 Bangalore (Karnataka), August 14, 2013: Upset over the alleged wrongful depiction of Lord Bahubali in a play, the Jain community is contemplating legal action.

The community has taken objection to the depiction of Lord Bahubali as a cobbler in Chakraratna, written by K Y Narayanaswamy and staged by Bangalore-based Roopantara theatre group. The play, said to be based on Pampa’s Adipurana, has portrayed conflict between violence and non-violence in a contemporary manner. What has drawn the community’s ire are some alleged ambiguities that have crept into the script, alienating it from the original texts or puranas.

Nitin H P, executive director, Jainheritagecentres.com, an online portal dedicated to propagation of Jainism, said: “The playwright has claimed that the play is based on Adipurana. But if you watch the play, you can see that it has deviated from it in several instances. Bahubali has been shown as a cobbler contrary to how he has been portrayed in Adipurana. The other distortions include portrayal of three forms of fight – Dhristi Yuddha, Jala Yuddha and Malla Yuddha – between Bahubali and his brother Bharata. While Malla Yuddha has been shown as per the texts, the other two have been shown through a dancer. The character of Nilanjana in the court of Adinath has also been distorted. The play suggests her tongue was stitched by a cobbler (Bahubali), but there is no justification to it in the texts.”

According to Nitin, H A Parshwanath, a well-known Jain scholar, has raised objections over the portrayal of Bahubali. “We have already communicated to the playwright and the troupe, but they said it was their creative freedom. We requested them not to stage the play until the mistakes are corrected.”

However, they went ahead and staged a show last week. “We are holding talks with the office-bearers of Karnataka Jain Association and planning to initiate legal action over the distorted portrayal of Bahubali,” Nitin said.

However, the community has lauded the direction and performance by the artists. “The music and choreography are awesome. Such plays help create an awareness about Jainism provided the director and playwright stick to the original texts,” he said.

S Jitendrakumar, the president of Karnataka Jain Association, said: “We have expressed our dissent. They told us they would invite us for a discussion and a special staging of the play. All of us, along with Jain scholars, including Dr Hampa Nagarajaiah, will sort out the ambiguities. If they could incorporate the changes and do justice to the texts, then that would be end of the controversy.”

K S D L Chandru, the director, said: “ As far as we are concerned, there is no distortion of the image of Bahubali. There is no doubt Bahubali is a great figure at a time when the world is infested by terrorism and violence. Hence, we have portrayed him as a cobbler who stitches the wounds of humanity. We showed the script to Dr Hampa Nagarajaiah and Kamala Hampana. They attended our first performance and lauded its portrayal. We don’t want to hurt anybody. We are open to discuss the issues with the community members and representatives.” – Published in Bangalore Mirror on August 15, 2013 at the Behest of WWW.JAINHERITAGECENTRES.COM’s initiative (Link on Bangalore Mirror – http://www.bangaloremirror.com/article/10/2013081520130815010531403a4656c85/-Jains-upset-over-Bahubali%E2%80%99s-%E2%80%98modern%E2%80%99-portrayal-in-play.html)