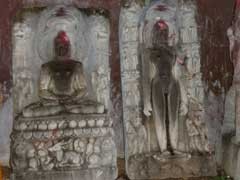 Large numbers of Hindu devotees have been worshipping Jain and Buddha images in many temples in villages Hatadiha , Chandipur,  Champeipala,  tarangasagarapur Kantabania, Chandipur , Asanapur of Jajpur district since time immemorials.

“The Brahmins and other upper caste Hindus are trying to obscure the separate Jain and Buddhism   identity.  Jainism , Buddhism and Hinduism are different. We do not keep their deities in our  temples , so why dress up images of the Jain  as local gods?, asked a noted dalit leader and Buddhist Ashok Mallick of Kendrapada.

There already exists before the Supreme Court a case filed by Buddhists challenging the dominance of Hindus in the Bodh Gaya Temple Management Committee. The judgment of the Court is awaited, said Mallick.

In a flagrant violation of law and order and the freedom of worship, many  ancient statues of Buddha  and Jains  were   installed in  Hindu temples in Jajpur .

Hindu devotees  continued to worship the Buddha and Jain  statues and usually dashed coconuts to the older statues as a result many statues were damaged.

Local  Budhists and  Jain followers  demanded many times  that the old statues  be handed over to them . But the authority and priests of the temples are not listening our demands, added Mallick.  Buddhism tells followers they can free their lives from suffering by controlling desires. Buddhists do not practice the same rites and rituals of Hinduism, nor do they believe in reincarnation. But most religious scholars agree that many fundamentals of the two faiths are identical. “There are parallel teachings. Both teach compassion, equanimity, joy,” said Dr Ekadashi Padhi a researcher of Jajpur.

When contacted Ashok Kumar Paten the superintendent of archeological survey of India (ASI) said “ Many Hindus have been illegally and forcefully worshipping many Buddha and Jain images in Jajpur district. We urged them many times to hand over these rare images to us and we wanted to keep these images in the museum. But they refused to hand over these rare images”. -Report by Ahshay Rout, Odishadiary.com