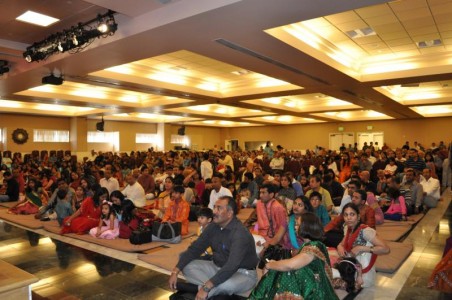 Southern California (USA), May 2, 2012: The auditorium is alive with brightly colored saris. The turquoise, red, and yellow outfits sparkle as Southern Californian Jains impatiently wait for the annual ceremony to start.

Dr. Jayesh Shah is having a hard time quieting the excited audience, which consists of over a thousand people.

This Sunday marks an important holy day at the center.  Today, Jain Cultural Center and Temple members are celebrating the birth of the religion’s most important god, Lord Mahavir or T?rtha?kara, with a daylong event that includes a program with 160 children.

“This is a very exciting day,” said Komila Doshi, one of the children’s program coordinators, who is originally from Singapore.  “Jains from around Southern California are here today to celebrate our culture and Mahavir’s birth.”

Jainism is an Indian religion that teaches its followers a path of non-violence towards all living beings. Its philosophy and practice emphasizes the necessity of a person to work towards achieving “moksha” or divine consciousness and liberation.

The essence of Jainism is concern for the welfare of every being in the universe and for the health of the universe itself. Thus, Jains believe that animals and plants, as well as human beings, contain living souls. Each of these souls is considered of equal value and should be treated with respect and compassion. It is for this reason that they sweep the floor in front of them to prevent the unnecessary killing of any living souls.

Although today is a special day, these types of large gatherings are common for the Jain Center of Southern California.  The local Jain population is rapidly expanding and the Buena Park center is at maximum capacity. The temple’s board of directors hopes the turnout will be auspicious since it needs to raise the money to pay off the existing loan for the $20 million center, and for its much needed expansion project.

More than 1,200 Jains have come to celebrate Mahavir at their only place of worship in Southern California. Weekends and holy days draw big crowds according to Shah, who serves as the president of the temple.

“We started with only a few families and each year the amount of members grew to where ultimately we had to build this building,” said Shah, who moved to Orange County from Gujarat in the mid-seventies.  “We are trying to raise more money for an expansion to this building.  The community is growing so fast that we almost don’t have enough room for our members.”

Jayesh Shah has been president of the Jain Cultural Center and Temple for the last two and half years, but he has been an active member since it began in 1979.  This year, he began the planning process for a new expansion project, the center’s religious library.  Shah said that theirs is the largest book collection among North America’s Jain temples.

Shah said the community is growing so fast that the center barely fits all the members and cites several reasons for the increase.  First, many Indians are immigrating to California.  Also families that are here expand rapidly, and more Indian students are coming to USC and UCLA.

Doshi and Komal Desi, who coordinated the children’s’ program, said that they started planning for the “grand celebration” in January 2012. The two temple colleagues said this is a very special day for young Jain followers.

“Especially for the younger generation, we have more proof that Lord Mahavir existed,” said Desi, 35, who is originally from Bombay.  “This is important for them to understand why they should celebrate today and support their religion.”

Mahavir, according to Jain tradition, was the 24th and the last Tirthankara. More than 2,600 years ago, he taught followers “ahimsa” or non-violence and to “live and let live.”

In Jainism, a T?rtha?kara is a person who has achieved enlightenment and become a role model and leader for those seeking spiritual guidance.  There are 24 T?rtha?karas in this time period and each of them revitalizes the Jain Order.

“It is our most auspicious day, the last Tirthankara for Jain religion,” said Manilal Metha, a former Jain Temple president.  “He helped to spread Jainism throughout India.”

Accordingly, the Southern Californian Jain community believes this is a good day to ask for additional funds to pay off their current loan and to start on the temple’s much needed expansion.

The non-profit completed the $20 million dollar cultural center and temple in 2008.  The cultural center is constructed of Jaisalmer yellow sandstone, and the temple is made from carved white marble, both imported from India.  Some $3 million remains on the loan.

Metha says that the temple board has yet to discuss the exact amount of money needed for the library since they are focused on paying off their current loan.  But, the upcoming expansion is on everyone’s mind.

At the children’s program’s intermission, the Jain temple’s director, Mahesh Wadher, stands up and addresses the dispersing crowd about the temple’s finances.

“We are still 3 million dollars away from paying off our loan for this building,” said Wadher.  “We need to pay this off before we start on the fundraising for our new library.  I think we can do it.  Please be generous and donate.”

Shah echoes his colleague’s pleas as he holds up a red iPhone found on the auditorium mat.

“Attention everyone!  Please be quiet!  Someone just turned in a nice, red iPhone,” said Shah. “If this is someone’s phone, you may claim it from me at the side of the stage.”

Then, Ramila Shah, Shah’s wife, chimes in loudly:  “You must donate $500 dollars to the temple to get it [the phone] back!”

A short time later, Shah, grabs the microphone again announcing that the owners of the iPhone “have offered generously to donate $500 for finding their phone.”

The temple president sits down in the front row of the auditorium as the children’s program resumes the show.

“That’s how we get donations,” he says to a visitor. – News Courtesy: Jennifer Whalen & neontommoy.com