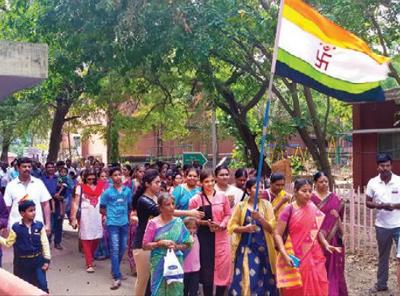 Chennai (Tamil Nadu), March 5, 2017: They have walked to abandoned and neglected Jain sites in various parts of Tamil Nadu 38 times. But the 39th walk, held in the city on Sunday, trod a different path. At least 300 heritage enthusiasts went on an Ahimsa Walk through the Government Museum in Chennai to see the rare Jain sculptures housed inside it. The museum maintains a collection of 44 stone and 29 bronze sculptures of Jain Tirthankaras, Yakshas and Yakshis from the 8th-16th centuries AD.
Although the museum is renowned among scholars for its collection of ancient Jain idols and sculptures, few members of the public are aware of it, which made the choice of location especially apt. “Normally, Ahimsa Walks are conducted at remote and neglected Jain sites in Tamil Nadu to create awareness about them. But this is the first time such a walk was conducted inside a museum. It was a great experience,” said K Ajithadoss, a Jain scholar who led the walk.
The rare Jain idols and sculptures displayed at the museum were brought from various locations of the erstwhile Madras Presidency and many bear inscriptions on them.
“The collection in the government museum is well known throughout the world for the large number of sculptures as well as their heritage value. Many, including Jains living in Chennai, are not aware of this treasure. So the walk was an eye-opener for them,” he said.
The walk began at 9am and went on till 2pm. For many, it was a great learning experience. “We never knew how to identify one Tirthankara from the other. The scholar who walked with us told us how one can identify the Tirthankaras based on each one’s style,” said K Murugan, a regular at the Ahimsa Walks. “I have been to many neglected Jain sites in remote areas. We even clear the bushes and walk. Climbing the rocky hills was always difficult but it was for a cause, so we always enjoyed it. This walk was different because it opened our eyes to the rich heritage of the Jains,” he said.
P Rajendra Prasad, one of the organisers of the walk, said the museum maintains the artefacts well. “We are grateful to the curators and other officials of the museum. They are doing a great job. We had a discussion after the walk and many came forward to preserve the abandoned and neglected Jain sites across the state,” he said.
Once thriving across Tamil Nadu, the Tamil Jains belonging to the Digambar sect are now facing an identity crisis due to migration, urbanisation and lack of leadership. “Jain villages flourished from Kanyakumari to Kancheepuram. But, today, there are only 132 Jain villages in the state,” said Ajithadoss. There are more than 100 Jain hills in the state. “Jain idols and sculptures are found abandoned in many areas. We are trying to create awareness among the public about our rich tradition. Today’s walk helped us find more like-minded people who want to preserve such sites,” he added. – News & Image Courtesy: Times of India