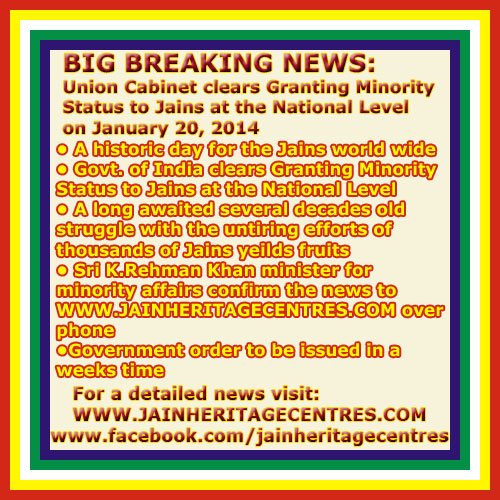 New Delhi, January 20, 2014: The union cabinet has cleared the proposal from the ministry of minority affairs to grant minority status to the Jain community at the national level. The Jains will be notified as minorities under the section 2C of National Commission of Minorities Act 1992. The Jains will be the 6th religion to be included under the act along with the other 5 religions, viz.,  Zorastrians (Parsis), Buddhists, Sikhs, Christians and Muslims. The union minister for minority affairs Mr. K. Rehman Khan informed this to Mr.Nitin H.P., executive director of WWW.JAINHERITAGECENTRES.COM (JHC) while speaking on phone at around 8.20 pm soon after the cabinet  meeting from his residence.

Government Order (GO):  When enquired as to when the GO in this connection will be issued,  Mr. Rehman Khan informed that it will be issued in about a week’s time.

Jain Delegation Thanks Rehman Khan: Mr. U.Sudhir Lodha, member of the state minority commission, Government of Tamil Nadu; Mr.R.P.Jain, Jain leader from New Delhi, mentor & advisor of JHC & Jain Acharya Lokesh Muni and other members of the Jain community arrived at the residence of Rehman Khan following the cabinet meeting and immensely thanked him for the same.

We cannot forget our gratitude for the kind blessings of our revered Acharyas, Sadhus & Sadhvis from all sects of Jainism.

Some facts that helped Jains to get Minority status, although belatedly –

It is reliably learnt that during the discussions at the cabinet committee on the subject the following points were inter-alia highlighted:

Reactions on granting the minority status –

Dr.H.A.Parshwanath – Jain researcher, theatrist, co-founder of JHC & former joint director – department of medical education, government of Karnataka,  has expressed his satisfaction for according the minority status for the Jain community at large and thus paving the way for its due recognition in all spheres of life. – Inputs from Mr.U.Sudhir Lodha,  Mr.R.P. Jain & Nitin H.P., Jain Heritage Centres News Service