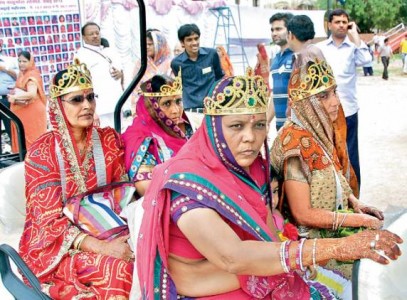 Chennai (Tamil Nadu), July 21, 2012: More than 600 Jains, including 150 from other states, fasted for eight days at YMCA, Royapettah till Friday to commemorate the 112th birth anniversary of Anand Rishiji Maharaj, the second Pattadhar Acharya of Jains, and also for world peace.

“Jains have a tradition of fasting and this is the first time that a fast had been held for eight continuous day in a synchronised manner. The age group ranged from 12 years to 75 years. People from Maharashtra and Bengaluru too joined in the fasting,” said Sanjay Bhansali, committee member of Sakal Jain Shree Sangh Chaturmas Samiti 2012.

On Friday, Jain guru Upadhyaya Pravar Pravin Rishiji of Pune spoke on various topics, including the importance of a happy home, law of karma and Jainism.

“During the Chaturmas, the Jain saint will take seminars. In Maskaman, a person does not have any food and only takes water for 720 hours and in case of Athai (for eight days) a person stays without food for more than 192 hours,” said Sanjay.

“This is the first time that I fasted for eight continuous days. Only the first day was tough and I got used to the fasting, which gave me a lot of energy,” said Aakanksha Chordia, a young graduate.

Jethumal Chordia, who works in an automobile company, said the fasting gave him much-needed inner peace. Among the 600 Jains, a majority were women. – News Courtesy: Deccan Chronicle