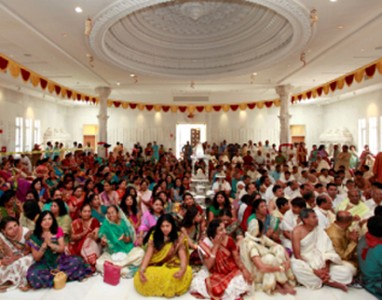 New Jersey (USA), July 25, 2012: The Jain Center of New Jersey was inaugurated with a 10-day Pratisha Mahotsav bonanza, where thousands of devotees from across the country converged for several ceremonies and a lavish parade.

The highlight of the festivities was an extravagant procession, which took place July 4 and consisted of nine different floats and drew 5,000 people. Floats were decorated with German silver, flowers, American and Jain flags, had live music, dolis, with Pathsala children participating.

Cultural programs were a large part of the inauguration as well, with religious dances like garba and dandiya performed at the main entrance of temple. Other highlights included a “flower shower” from a helicopter, elaborate, robotic displays on the lives of Mahavir Swami and the five Kalyanaks.

The Jain Center acquired almost ten acres of land in Franklin Township in Somerset County, and the total area of the project is 51,000 sq. ft. The traditional derasar has a total area of about 6,000 sq. ft.