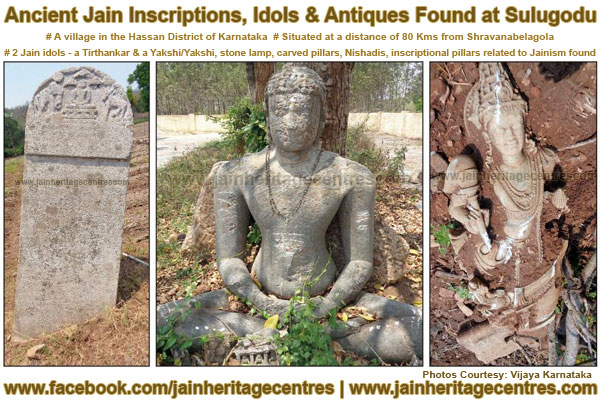 Sulugodu (Arakalgudu Taluk, Hassan District, Karnataka), April 7, 2015: Ancient Jain inscription, Jain idols and several other ancient antiques have been found in Sulugodu village of Arakalagudu taluk in Hassan district of Karnataka. The idols were discovered in the open fields of the village near Nandi temple. These were discovered while the field was being levelled through JCB.

Two Jain idols (one of a Tirthankar in padmasana & one of a Jain Yaksha/Yakshi), stone lamp, carved pillars, Nishadis (memorial stones) & inscriptional pillars have been found. Looks like all these antiques belong to Jain tradition. Further research is expected to reveal much finer details about the existence of Jainism in the region. – Image Courtesy: Vijaya Karnataka