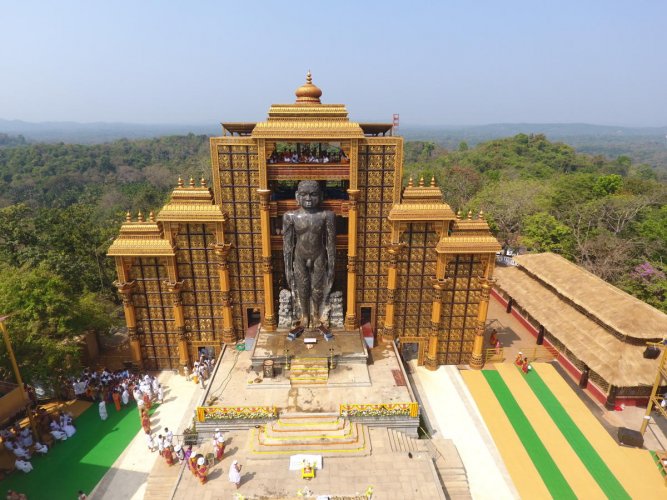 Dharmasthala (Dakshina District, Karnataka), February 18, 2019: Foregoing the temptations posed by materialistic life is the only way to achieve spiritual bliss, opined Sri Prasannasagara Muni Mharaj. In order to come out of all miseries and lead a life of contentment, one needs to imbibe the spirit of Bahubali, he said, addressing a sea of devotees on the second day of anointment rituals at Sri Kshetra Dharmasthala on Sunday.

He said to live a life without regrets, one needs to emulate virtues of peace and forgiveness propagated by Bahubali and eschew all that complicates the life of an individual. However, he said, in the modern world, an individual had increasingly been devoting excess time to the materialistic world, and giving little or no time to factors that really mattered for a life of spiritual contentment.

He called upon people to renounce anger and materialism to attain spiritual bliss. To further establish this, he cited the example of D Veerendra Heggade. The Jain muni said while there was huge clamour to propose the harmasthala dharmadhikari’s name for the post of President of India, the latter voted against the popular sentiments so he could devote his life to the service of Bahubali and welfare of the people in his own way.

Acharya 108 Pushpadantasagara Muni Maharaj said the sculpture of Bahubali may have been carved out of a stone, but each alphabet of the word ‘stone’ sent out a message. ‘S’ stands for selfishness, ‘T’ for torture through tongue, ‘O’ stands for being opinionated, ‘N’ for nag (harassment) and ‘E’ for ego. He said unless one gave up these evils completely, one cannot attain inner peace.

I have participated in Mahamastakabhisheka rituals elsewhere. One hopes to imbibe the sense of detachment and  sacrifice of Bahubali. Unlike Shravanabelagola where it is a steep climb to reach the monolith, it is easy to reach the idol at Ratnagiri. I bought the tickets for the anointment a week ago, and have come with my family for the
event. – Dhananjaya Jain from Karkala

One cannot fix a price for devotion and dedication that went behind organising Panchamaha Vaibhava. Volunteers under art director Jeevanram Sullia, Neenasam, trained artists and dancers from Bengaluru who turned stage artists for this enactment and created a production which had artistic and visual splendour. Bahubali’s life came alive over 5 days in 10 episodes, with eminent scholars writing the script. – Hemavathi Heggade, co-author of Panchamaha Vaibhava.

The 3D projection encapsulating the life of Bahubali was so well elaborated in Panchamaha Vaibhava, which is actually 6 months of work, that was compressed into 2-1/2 months. While this has been tried with some success in palaces of Europe, it is a unique effort to do so on a monolith. The show that was initially conceptualised for 10 minutes is now an 18 minute show which is staged at 7 pm, 7.30 pm and 8 pm. – Shreyas Kumar, brain behind the 3D show at Ratnagiri

My first memory of Mahamastakabhisheka that Heggade performed is a faint one of the first one held in 1982 as a child of three or four. I distinctly remember the white cloth covering the monolith being drawn down, that is done only once, after a monolith is installed and consecration rituals are held. The present Mahamastakabhisheka and the panchamaha vaibhava held as part of the rituals is the grandest of the four anointment rituals so far. – Shraddha Amith, daughter of Heggade.