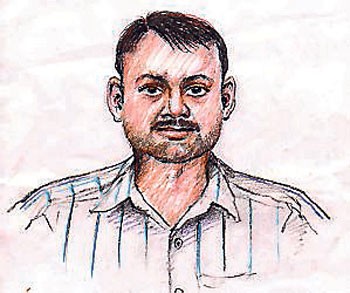 Mangalore (Karnataka), July 7, 2013: On the back drop of the theft of antique Jain idols from ‘Siddantha Darshan Temple’ at Moodabidri the Mangalore police have released a sketch of the suspect. In a press release the police have said that the suspect is well built, white coloured and aged around 30 years. Further, he has short hairs, a beard with short hairs and moustaches. At the first instance he seems to be from Uttar Pradesh. On the day of the theft and on its previous day a person with some suspecting movements was seen moving around in and around the Jainpete area of Moodabidri. One of the persons from from north India whose a suspect had spoken to the localites in Hindi and is said to have asked them with the words, ‘Dharmasthal hana hai kidar rasta’. He wasn’t seen on saturday (July 6, 2013) in the town. Further, a Hindi speaking person has gone to Belathangady by auto. It is yet to be confirmed if it was the same person who was roaming around in Jainpete.
List of Idols yet to be confirmed: There have been speculations about the idols stolen based on the inputs from different people. However, the exact list of idols will be known only on the arrival of Swamiji and he has the details of all the idols that were kept in this temple. Swamiji is expected to arrive by 10.00 am on July 8, 2013.
Idols Kept in Safe Locker: The remaining idols at Siddantha Darshan temple have been kept is a safe bank locker.
Did not switch on the Siren: The person incharge of the temples security is assigned with the task of switching on the siren using his thumb impression before closing the temple. However, he had forgot to switch it on on friday. Coincidentally the theft has happend on the same night.
CCTV Installations: The CCTV installations are found at the entrance and interiors of the temple. However, the absence of a CCTV outside the temple has proven advantageous to the thief.
Renovation of Temple: As a precautionary measure works have started to repair the old doors and windows of the temple.
As a precaution entrance to Yatris have been restricted to this temple. Dr.D.Veerendra Heggade the Dharmadhikari of Dharmasthala has visited Moodabidri again and has indicated the heads of all the temples to appoint security personnel to protect the temples. – Jain Heritage Centres News Service