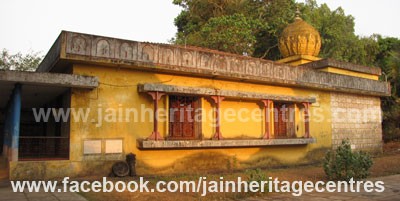 A file photo of ‘Siddantha Darshan Temple’ from JHC’s Collection taken on April 17, 2010

Moodabidri (Dakshina Kannada District, Karnataka), July 6, 2013: Rare, precious Jain idols have been stolen from the ‘Siddantha Darshan Temple’ at Moodabidri, the Jain Kashi. Speaking to Sri Nitin H.P. of WWW.JAINHERITAGECENTRES.COM (JHC) Sri Udayakumar the manager of Sri Jain Mutt, Moodabidri has said that news came to light this morning at 9.45 am when the he had taken the devotees for Siddantha Darshan. He confirmed that the theft has happend last night (night of July 5, 2013). He further added that they are yet to confirm the actual no. of idols stolen and their exact worth. However, the total worth of all the Jain idols are said to be several crores as there were several precious idols. The thiefs are said to have done this in a very planned way by cutting the security system using gas cylinders. Interestingly it is yet to confirm if any siren alerts had also gone. May be the miscreants have preplanned it and disabled the siren system. This is yet to be confirmed. The news has been communicated to the police by the trustees of the Jain Mutt. The Siddantha Darshan Temple has been locked after the initial inspection by the police. The Sniffer dogs are yet to arrive to help the police in their further investigations.

Bhattarakhji out of Country: His Holiness Swasti Sri Charukeerthi Bhattarakha Pandithacharya Swamiji, the pontiff of Moodabidri Jain Mutt is currentlyvisiting United States of America (USA) to attend the biennial conference of Jains Association in North America (JAINA). The news has been communicated to him and he will cut shot all his programmes and will be back to Moodabidri at the earliest.

Minister Abhayachandra Jain at Moodabidri – The member of the Legislative Assembly (MLA) from Moodabidri & the minister for youth affairs, Government of Karnataka is present at Moodabidri. He has taken stalk of the situation and has given instructions to the police department to find the culprits at the earliest.

CCTV Footage: The CCTV footage in the temple shows that the theft has been conducted by a single person wearing a mask. However, it has been difficult to figure out who the person is because of the mask. Further, he has broken the CCTV on entering the temple so it is difficult to trace him.

List of Jain Idols: There have been speculations about the idols stolen based on the inputs from different people. However, the exact list of idols will be known only on the arrival of Swamiji and he has the details of all the idols that were kept in this temple.

Reactions to the Incident:

JHC Expresses Shock: Sri Nitin H.P., founder & executive director of JHC and an IT professional from Bangalore & Dr.H.A.Parshwanath, professor of Pathology & co founder of JHC have expressed shock over the incident. Further, they have felt that inspite of having the requisite security measures the idols have been stolen. So, it is time now to safe guard our security system further. They have urged the Government of Karnataka to provide adequate security to the Jain temples in the state.

R.P.Jain’s Reaction: Speaking to JHC Sri R.P.Jain of New Delhi recalled his several visits to Moodabidri since October 1962 and said that in addition to these idols he also remember seeing many other valuable idols in the basement of a temple. But he is astonished that those idols are not shown these days. However, he is not sure which is temple in which the basement existed. He categorically said that in his vists in 2006 & 2007 to Moodabidri and had urged His Holiness Swamiji to take required security measures by installing double doors in all the temple and anti theft security motion/vibration/proximity scensors and sirens in the ‘Siddantha Darshan Temple’ to protect the valuables.

Dr.C.Devakumar’s Reaction: Speaking to JHC Dr.C.Devakumar, a retired scientist and Jain scholar said – “I cannot believe my ears. why are we still ignoring the security measures in spite of repeated theft cases and affordable costs of security equipments”.

Dr. Prof. Kanakaajitha Doss from Tamil Nadu: His reaction to the incident by email.

My dear Sri Nitin
it is shocking to hear the news.less said more better. although given advice to put all  security measures  (different kinds of security systems as mentioned in your message ) available in the land  that was ignored. it is a great loss  Let us pray to Sasana devatas  for the early recovery of the Holy Objects of our worship. your  service to the jain community and religion is highly commendable.
with great regards to my friend- brother

His Holiness Swasti Sri Charukeerthi Bhattarakha Swamiji, the pontiff of Moodabidri Jain Mutt in his reply (at 11:11 pm IST on July 6, 2013) to an email sent by Nitin H.P. the executive director of WWW.JAINHERITAGECENTRES.COM has expressed shock over the incident and has condemned the incident. He will be reaching Moodabidri on Monday July 8, 2013 around 10.00 am.

Below is given a copy of the email received by him:

Yes, we  are shocked by this terrible news. We are in touch with the members of the Jain Mutt from the time we heard from the Jain Mutt.

We have spoke to Dr.D.Veerendra Heggadeji of Sri Kshetra Dharmasthala. We have also communicated this news to His Holiness Swasti Sri Charukeerthi Bhattarakha Swamiji of Shravanabelagola. He has already started his journey to Moodabidri and will reaching very soon.

We have cut short our religious tour and have booked our return tickets to Moodabidri. We will be reaching Moodabidri by 10:00 am on July 8, 2013.

The JAINA and the Jains of USA have supported and co-operated with us and have condemned the robbery incident.

The police commissioner and the police team have also been supportive and have undertaken investigation at Moodabidri.

We are presently at the Jaina convention centre at Detroit and are leaving to the airport.

We strongly protest this incident, it is a very sad news.