Home » News » News Updates » Peace and Non-Violence: Inculcation of Jain Philosophies in the Youth for a Better Tomorrow

Peace and Non-Violence: Inculcation of Jain Philosophies in the Youth for a Better Tomorrow 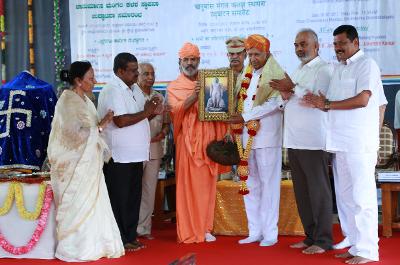 Shravanabelagola (Karnataka), July 7, 2017: Governor Vajubhai R. Vala said that it was Jainism which taught us the importance of sacrifice and non-violence and it enhanced the rich heritage of India when he was talking at Chaturmasa Mangala Kalash installation ceremony at Jain Mutt at Shravanabelagola in Channarayapatra taluk on Friday. The governor gave an instance of Mahatma Gandhi and said that he inculcated non-violence in all his struggle movements as he was highly impressed and influenced by the Jain philosophy. He said that there is a great need to incorporate such values propagated by Jainism in today’s younger generation as it will help us continue the tradition of truth, sacrifice and non-violence (ahimsa) in the country. Ahimsa indicates the absence of physical violence along with the absence of desire to get into any kind of violence. It will help maintain peace in the world. ALSO READ: The Concept of Divinity in Jainism: Where was God before the creation of the Universe? He added that one of the great works of art, the Gomateshwara statue at Shravanabelagola was a symbol of the values portrayed by the Jain philosophy. The big event of Mahamastakabhisheka which is scheduled for next year has been gathering support from the rulers since last 1,000 years and the present government. – News Courtesy: News Gram