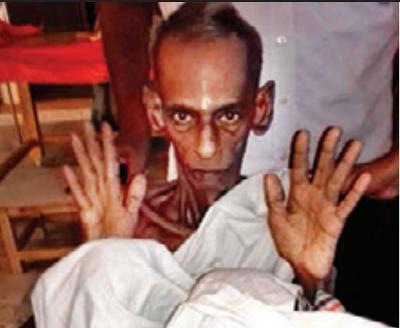 Chennai (Tamil Nadu), November 29, 2016: When the editor of ‘Mukkudai’, a monthly periodical of Tamil Jains, met its regular contributor and scholar J Appandirajan two days ago, he politely asked him to inform readers through a footnote that it would be his last column.
Seventy-six-year-old Appandirajan has been undergoing santhara (sallekhana), a Jain ritual in which an individual fasts unto death, at the Visakacharya Thapo Nilayam near Vandavasi in Tiruvannamalai district since November 20.
A prominent Jain scholar and author of more than 76 books, Appandirajan first gave up food and gradually reduced the intake of water.”He is conscious and at times gets into a deep meditative state as part of his soul purification ritual. He is on his ninth day today (Monday). He is on a sacred path with a strong sense of courage and self-determination,” said K Ajitha doss, a Jain scholar who visited Appandirajan on Sunday .
A Jain’s approach to death by observing the ritual provides him an alternative, nonviolent approach to the ultimate rite of passage. Santhara is a highly respected practice in Jainism, one the community believes leads an individual to a world of nonviolence after rejecting all desires in the material world.
Ascetics normally take the santhara vow, now rare in Tamil Nadu. Inscriptions in Tamil Brahmi, dating to the fifth century AD, found at Tirunatharkundru in Villupuram record the death of ascetic Chandranandhi, who undertook santhara and fasted for 57 days till his death. A 10th century AD inscription on a hillock in the same place records the death of Ilayaparadarar, who fasted for 30 days.
At least 35,000 Jains of the Digambar sect live in Tamil Nadu. Rapid urbanisation forced many of them to leave traditional Jain villages in Tiruvannamalai, Villupuram and Kancheepuram.
Not many , however, come forward to observe the ritual these days. And this is the first time a scholar is taking a bold step. “It’s a great practice. He is undergoing a shift where he is freed of all material things in this world,” said Ajithadoss.
Born at Vangaram village in Tiruvannamalai in 1942, Appandirajan retired as headmaster from a government-aided school in Vandavasi after 36 years of service.He organised literary conferences, debates and created an organisation called `Thirukkural Peravai’ with 500 members. He also started the Ilan go Adigal literary a cademy in the name of the Jain ascetic who authored the epic, ‘Silapathikaram’.
“He is a scholar of Jain literature. He has contributed immensely to literature by translating many books into Tamil, namely Tattvartha Sutra, Samaya Saram and Rathna Saram. He has written a commentary on Tamil epic ‘Thirthankar Kavya’ and publishing biographies of Jain Tirthankaras,” he said. The Jain com munity in Tamil Nadu had welcomed the decision of the Supreme Court in September 2015 staying a Rajasthan high court order banning the community from practising Sallekhana.
Marudevi Ammal, an 83 year-old woman in Tiru vannamalai, attained samadhi after observing Sallekhana for 42 days in 2015; it was the first Sallekhana reported after a decade in TN. – News & Image Courtesy: The Times of India