Chandragupta Basadi on the Chandragiri hillock at Shravanabelagola happens to be the oldest and one the most historic temple at Shravabelagola. Read through for a detailed article about this temple. 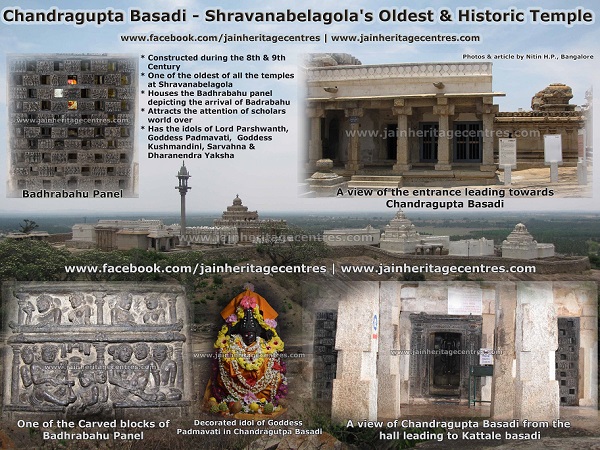 Shravanabelagola has always been a key pilgrim centre for the Jains world over and a great historic centre. It houses in it more than 800 inscriptions and has always been an attractive centre for historians owing to the vast historical data hidden in these inscriptions. More than anything for a layman the monolithic statue of of Lord Bahubali has been the chief attraction. It is also called as the Vatican for the Jains in south India.

In addition to the Bahubali idol & inscriptions we can find as many as 28 temples. Among these the most ancient and the one of historic temples has been the Chandragupta basadi. The Basadi constructed around the 8th or 9th century is no doubt one of the oldest of all Basadis in Shravanabelagola and the smallest basadi on Chandragiri hillock. It measures about 22feet by 16 feet. It originally consisted of three cells standing in a line and opening into a narrow passage. The cells on either side have small towers/pinnacles over them resembling the chola type.

Jain Deities – The middle cell of this temple has the figure of Parshwanath in Kayotsarga (standing) posture, the one to the right is of Goddess Padmavathi and to the left is of Goddess Kushmandini, all in a seated posture. In the verandah there are standing figures of Dharanendra yaksha at the right end and Sarvahna yaksha at the left.

Bhadrabahu Panel – A series of carvings attached to the entrance of this temple in the form of an ornamental doorway in front with perforated stone screens at the sides was probably added at a later date. The doorway consisting of five fascias of elegant workmanship is beautifully executed. The screens are pierced with square openings are carved with minute sculptures, interpreted in the light of Jaina tradition, as the scenes from the lives of the Srutakevali Bhadrabahu and the Mauryan Emperor Chandragupta. There are 2 panels with 45 small blocks on each side summing upto 90 blocks. Some irregularity is observed in the alternate rows of the eastern screens owing to some misplacement at some time. By replacing the topmost stone at the bottom and the bottom one at the top the rows regularity correspond with those of the western screen. Presence of this panel adds to the historicity of this temple and has attracted scholars from world over. In the middle of the bottom of 3rd row on the eastern half of the screen occurs a label Dasojah in characters of the 12th century. This is undoubtedly the name of the sculptor who made the screens and the doorway. He is very probably identical with the sculptor who carved some of the fine bracket images of the Chennakasava temple at Belur and therefore the period of the screens and the doorway would be about the middle of the 12th century A.D. Other parts of the temple are some of the oldest on the hill, probably going back to ninth or tenth century A.D.

The temple is so called because according to tradition it was caused to be erected by the Mauryan emperor Chandragupta.

The temple opens into the front hall which also forms the entrance to the Kattale basadi. In this hall stands a figure of Kshetrapala opposite to the middle cell of the Chandragupta basadi. The outer walls are decorated with pilasters, friezes, niches, the heads and trunks of lions mostly in pairs facing each other.

The idols of Goddess Padmavati in this temple and of Lord Parshwanath in Antarala Parshwanath Basadi has a huge followership across south Karnataka. Probably these two deities can be said to be having a very high followership next only to Lord Bahubali on the Indragiri hillock amongst all the Jain temples in Shravanabelagola.