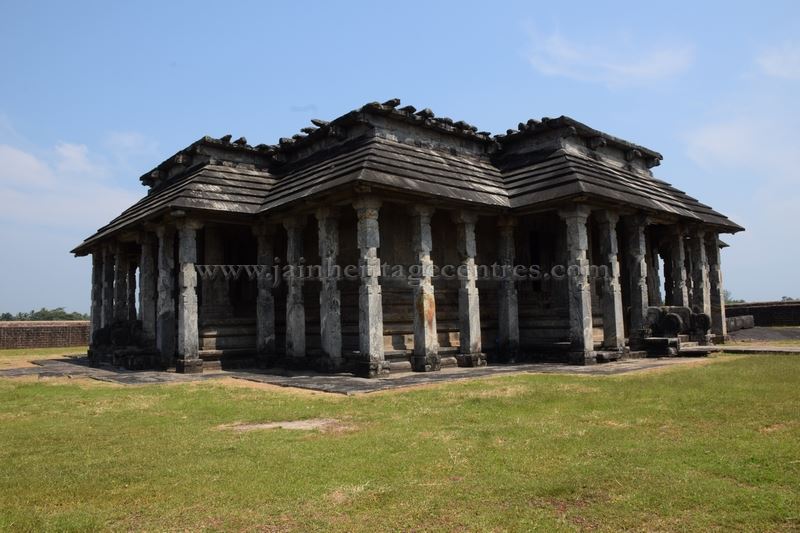 From atop the Bahubali hill at Karkala, the town unfolds like a masterpiece of an artist. Amidst nature, households, roads and structures; the Chaturmukha Basadi steals the limelight. The four-faceted Jain temple is situated at the centre of Karkala and gives an illusion that the entire town is constructed around it. This stone temple has stood opposite the famous Bahubali statue for more than four centuries now.

One can view the reflection of the Gomateshwara statue in a tiny mirror placed at the main entrance of Chaturmukha Basadi. The deities of this Jain temple, Ara, Malli and Munisuvratha tirthankaras, are situated on the four sides of the sanctum sanctorum, facing four directions and overlooking the town from the hill. While the residents of the town often seek the serene ambience of the temple and its surroundings, tourists from across the country regardless of their religious backgrounds also visit the site.

Sober disposition
The tranquil location of Chaturmukha Basadi is appealing as it overlooks the surroundings from over a black rock forming a picturesque sight. Climbing the steps that lead to the door not only places the visitor at the entrance of the temple but also makes the surrounding rocky ambience accessible. From the hill, the Jain Math of Karkala, and the Bahubali statue make for a spectacular view.

It only seems fitting that a temple situated right at the centre of a black rock hill is constructed out of black stone. The architecture of the basadi is nothing less than awe-inspiring, for the temple is constructed entirely out of stone with large and strong pillars supporting the roof.

Chaturmukha Basadi was constructed under the reign of Raja Immadi Bhairavaraya in 1586 and is among the most prominent Jain heritage structures in the country. Constructed within a square frame, the temple has similar grand entrances on four sides. Opening the large wooden doors will give us a view of three black stone statues standing in a detached yet composed mood. These are the deities Ara, Malli and Munisuvratha.

The composition of the pillars, corridors and architecture on all four sides is the same. The pillars around the temple are massive, rising in a simple design with little or no carving. Even with that simplicity, pillars are the soul of Chaturmukha Basadi, giving the place a robust and royal ambience. The temple advocates the idea of majesty in simplicity, and on entering the premises we are tempted to sober down and reflect. It also conveys the idea that Jainism does not incline towards decorative norms of the mortal world.

Centre of knowledge
While Jain temples are usually built on the concept of ‘Samavasarana'(refuge to all), Chaturmukha Basadis are built on the idea of propagating the knowledge in all directions. It is believed in Jainism that tirthankaras radiate an energy which is deciphered by ganadharas (translators) and propagated as knowledge. There is another Chaturmukha Basadi in Karkala, in Anekere, called the Kere Basadi. It has a simple architecture.

Yet another speciality of the Chaturmukha Basadi is the priest who has been serving at the temple for over 40 years now. Nabhiraja Indra is a visually challenged man who lost his eyesight in his 20s after an acid mishap. He has been serving at the temple ever since and is renowned for his dedication towards the temple and his independence despite the lack of sight. He says that despite the odds he has faced in life, Chaturmukha Basadi has made it possible for him to be a composed soul.

This temple is maintained by Nabhiraja Indra and his family, assisted by a few Jain residents in Karkala. Despite being an archaeological heritage structure, the Chaturmukha Basadi receives little support from the government. However, the residents of Karkala revere the place and flaunt it, as it is a legacy left behind by the Jain rulers of the previous centuries.

It is talked about, photographed and most importantly sought after frequently by the residents of the town and outside. Karkala does have a total of 21 Jain temples and a Bahubali hill that attracts more pilgrims than any other place in the vicinity. The town has kept the sanctity of its heritage spaces intact by maintaing them well. – Article Courtesy: Deccan Herald