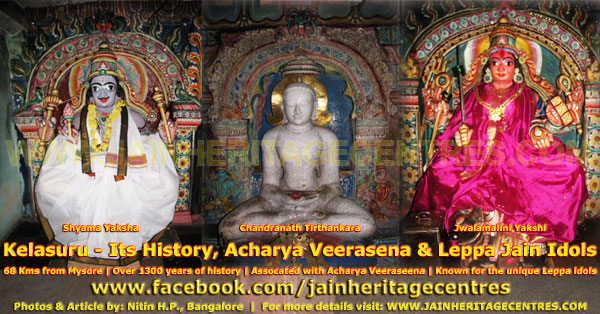 Kelasuru (Kelasur), a remote village in the Gundlupet taluk of Chamarajanagar district holds a very unique place in Jainism with a prolonged history of 1300 years, it is associated with the renowned Jaina Acahrya Veeraseena and known for its unique Leppa idols. In the ensuing lines let us explore the rich heritage of this astounding Jain heritage centre.

History – Its history dates back to the 7th century A.D. and begins with Acharya Veerasena who along with Jinasenacharya wrote the explanations/commentaries of the most sacred Jain shastras the Dhavala, Jayadhavala & Mahadhavala.

Chandraprabha Tirthankara Basadi – This is a very ancient temple said to have been built during the 7th century A.D. No inscriptional references are available to prove this fact. However the mention of Kelasuru by Acharya Veerasena in the Dhavala works and in ‘Rajavali Kathasara’ by Devachandra might help us conclude that this temple existed since the 7th century.

Temple Structure – The temple has a Navaranga (wide hall), Sukanasi (smaller hall) and a Garbagriha (sanctum sanctorum). The Navaranga does not have any idols or installations and is reserved exclusively for the devotees to sit and worship. The Sukanasi has the 18 inches high white coloured marble idol of Lord Chandranatha in Kayotsarga (standing posture) at its centre. Nitya pooja and abhisheka is performed to this idol every day. To the left of this idol are found the idols of Brahmayaksha, Goddess Padmavathi and Goddess Kushmandini installed in a row on a pedestal. Abhisheka is performed to these idols every day.

Th entrance door to Sukanasi is attractive and consists of carvings on all the three sides. It is said that Acharya Veerasena has got these done. Further, the Hostilu (the threshold) of this door is pretty wide and has some depressions on it. It is believed that Acharya Veerasena used to sit here, put the ink used for writing the palm leaves in these depressions and do his writing.

Leppa Idols – Behind the marble idol of Chandranatha in Sukanasi on either sides are found the 5 feet high idols of Shyama Yaksha & Jwalamalini Yakshi the guardian deities of the 8th Jain Tirthankara Lord Chandranath on the right & left sides respectively. We can find a 3 feet high idol of Lord Chandranath in Padmasana in the Garbagriha. The uniqueness of these three idols is that they are all made of Leppa (clay) and have been painted as per the Jaina siddantha. The idols of Shyama Yaksha & Jwalamalini Yakshi are probably one of the biggest of their kind. These kind of Leppa idols are rare to see and very unique of its kind. Some of the other Jain temples  with Leppa idols are at Parshwanath Swamy temple Penukonda (Andhra Pradesh), Leppada Basadi & Hire Basadi (Moodabidri).

Renovation of the temple – A Kannada inscription of Monday, January 12, 1829 A.D states that this temple at Kelasuru was renovated and the idols painted freshly on the application of a person by the Mysore King Krishnaraja III.

Recent Renovations – The temple was renovated recently at the behest of His Holiness Swasti Sri Bhuvanakeerthi Bhattarkha of Kanakagiri Jain Math.

Jain Idols in the Vicinity – Many Jain idols we found in the vicinity of the temple and all of them have been kept in the premises of the temple. Among these the 5 feet high idol of Lord Parshwanath in Kayotsarga posture is very remarkable. This was discovered while digging a foundation of one of the houses in the village around 35 years back. A part of its hand has been damaged. The recovery of many Jain idols in and around the temple further substantiates the fact that this was a chief Jain centre.

Location of Inscription – One of the walls of the temple.

Characters on the inscription – Belong to 19th century.

Summary – This record states that on the application of an person (name is lost in the inscription) the Mysore King Krishnaraja III son of Chamaraja IX renovated the temple at Kelasuru. The temple and idols of Chandranatha, God Vijaya and Jwalini Yakshi were painted freshly.

Location of Inscription – Inscription installed on the western side of the temple’s premises.

Summary – This record states that during the reign of Hoysala King Vira-Narasimhadeva II, two persons Gopuyya and Ranganna made a gift of Nibandhi (endowment) and income from manneya (house) for worship of the Basadi at Kelasuru in Kudugunad (name of a region).
The inscription also refers to mahaprabhu of Heriyanad Sankara. However the text in the following line is missing.

Date of Inscription – May be 12th century. Not explicitly mentioned, can conclude based on the characters of the inscription.

Location of Inscription – The foundation stone of the temple.

Characters on the inscription – Tamil and Grantha characters of 12th century.

Summary – The date of the inscription is said to be the 14th year of Solagangadeva, records the gifts of taxes probably from the village Kallur in Kudugur-nadu, land of the sowing capacity of 12 kandugas in Kellasuppulaichcheri (here Kelasuru is refered as Kellasuppulaichcheri) and the land in Tenkottai as Pallichchandam to the deity (name lost) in a Jaina temple by Vikkiramacholapperumadigamundan of Kellasuru in Kudugurnadu in Gangaikondasola-valanadu, a division of Mudigondasola-mandalam. The record was engraved by a goldsmith Manikkachari, son of Rajachari, of……kulam (name lost).

Date of Inscription – May be 12th century. Not explicitly mentioned, can conclude based on the characters of the inscription.

Location of Inscription – The foundation stone of the temple.

Summary – The date of the inscription is said to be the 14th year of Solagangadeva,

Recent Constructions & Planned improvements – Kelasuru is situated at a distance of 17 Kms from Kanakagiri the only Siddakshetra in South India and His Holiness Swasti Sri Bhuvanakeerthi Bhattaraka Swamiji is the pontiff of Kanakagiri Jain Math. At the behest of His Holiness Swamiji a lot of improvements have been taken up at Kelasuru and a Bhattarkaha Bhavana is under constructions for His Holiness Swamiji to stay at Kelasuru for around a week every month. Apart from this a Yatri Nivas, Tyagi Nivas and compounding the temple area has been planned.

Priest – K.T.Dharanendraiah, the priest of this temple has been living at Kelasuru since the past 35 years and has been looking after the temple since then.

How to Reach – Kelasuru is situated at a distance of 9 Kms from Gundlupet the taluk centre, 17 Kms from Kanakagiri the Jain pilgrim centre, 46 Kms from Nanjanagud and 68 Kms from Mysore.

The nearest railway stations are at Nanajanagud & Mysore.

The nearest airport is the Mysore airport situated at a distance of 60 Kms from Kelasuru.

(The WWW.JAINHERITAGECENTRES.COM team members that were involved in the field visit to this temple on October 12, 2013 –  Nitin H P & Brahmanand Chipre)

Short URL to the map – http://goo.gl/maps/CTdXK