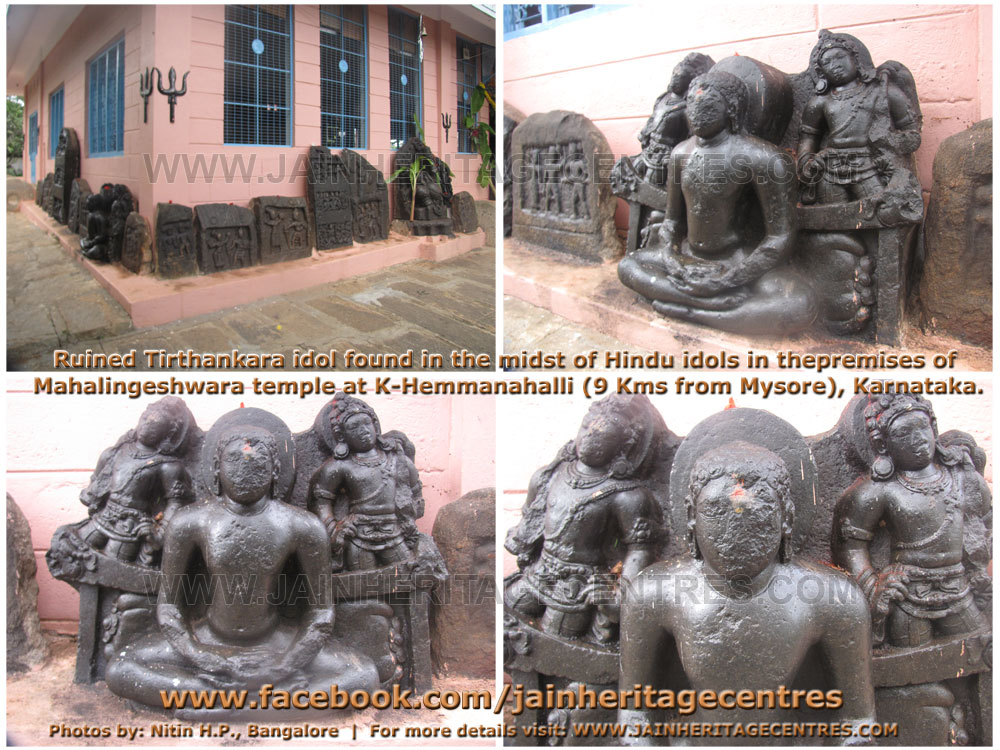 K.Hemmanahalli’s Ruined Tirthankara idol in the premises of a Hindu temple near Mysore – Worshiped as per Hindu Traditions

K.Hemmanahalli – This is a small village situated at a distance of 9 Kms form Mysore. A ruined idol of Tirthankara has been burried through its pedestal in the midst of other Hindu idols in the premises of the Mahalingeshwara temple. This is the only Jain idol found in the temple premises. The idol along with the other idols is smeared with oil completely and worshiped as per Hindu traditions.

The idol is in Sukhasana posture and is flanked by chowri bearers on either sides. The face of the idol is completely ruined and parts of its hand have been chopped off. It is hard to figure out the Tirthankar name as its pedestal is burried and we cannot find any inscriptions on the idol.

Inscriptional references near the temple state that Mahalingeshwara temple belonged to the Hoysalan period and was renovated in the late 90’s. No references are found about the existence of any Jain temple or about the Tirthanakra idol in and around this temple.

It is very disheartening to note that the Jain community has shown a blind eye towards this inspite of having a Jain population of close to 2,500 Jain families in Mysore.

(The WWW.JAINHERITAGECENTRES.COM team members that were involved in the field visit to this temple on October 14, 2013 –  Dr H.A.Parshwanath, Brahmanand Chipre, Priyanka Chipre, Nitin H P)