A very thought provoking article about the Jain ruins at Upponi a village in Uttara Kannada district of Karnataka its unique Jain connections & beliefs. 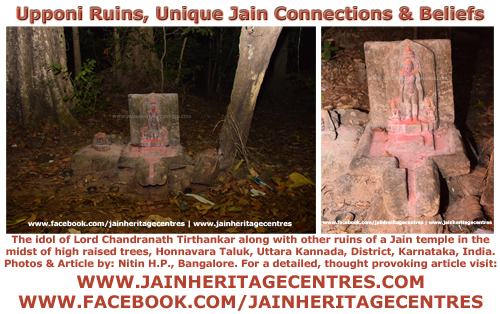 The Jain ruins at Upponi, a small village in the Uttara Kannada district of Karnataka has a very unique Jain heritage with unique connections and beliefs around the Tirthankar idol is very unique of its kind. In the ensuing lines let us explore the unique heritage of Upponi.

Location – Upponi is a small village with about 300 families in Uttara Kannada district of Karnataka along the national highway 206 (NH 206) at a distance of 23 Kms from Honnavara, the nearest taluk centre and 62 Kms from Bhatkal. Further, it is at a distance of 10 Kms from Gerusoppe, the ancient Jain town which served as the capital of the Saluvas for a considerable period.

Jain Connections – Owing to its proximity to Gerusoppe its history goes hand-in-hand to that of this historical place. The ruins of a Jain temple in the village provides us substantial evidence to prove its Jain connections. Upponi’s population in prominently dominated by Nayakas, fishermen and a few Nawayath Muslims.

Nawayath Muslims & Jain Connections – The Nawayath Muslims are found thickly populated along the Honnavara and Bhatkal taluks, Uttara Kannada district. As the history goes, a section of Muslims involved in trading sailed from Persia and the middle eastern countries for trade towards costal Karnataka. During the course of their stay here they married into another trading community of India, the Jains. The Women are Jains while the men are Muslims. A new caste system emerged and lead to the formation of Nawayath Muslims. This further substantiates the fact that these Nawayath Muslims at Upponi might have been Jains several centuries ago!

Upponi & Muppane Family – As the history of this region goes and the Jain ruins at Gerusoppe and other surrounding places substantiate the fact that this belt might have been predominantly dominated by Jains. Owning to business reasons, onslaught of other religions and natural calamities the Jain roots were disturbed and some of them migrated to the other sides of the western ghats around Jog falls. These migrated Jains bear the family name Muppane and are setteled in the Sagar taluk of Shimoga district. Their population is around 3000 members across Sagar taluk and one of the major families spread across this taluk. The members of Muppane family trace their roots to Upponi and the word Muppane is a transformation of Upponi. Not many people of the Muppane family are aware of thier traces to Upponi.

Jain Ruins – We can find the ruins of a completely dismantled Jain temple and a Tirthankar idol in good shape at this village in the midst of thickly grown trees at a distance of around 700 meters from NH 206. The Tirthankar stone idol is about 12 inches high in the Kayotsarga posture. This is in proper shape and is worshipped by the localites. Among the ruins we can find a couple of stones that were used as pedestals for installing Jain idols. The size of the pedestals indicate that a much bigger Tirthankar idol might have been installed here.

Jain Heritage Centres (JHC) Confirms the Tirthankar – The localites were not sure about the Tirthankar’s name. After examining the idol closely Mr.Nitin H.P. (from Bangalore) & Mr. Nagaraj Jain (from Gerusoppe) were able to confirm the idol as Chandranath. This was based on the blured carving of a crescent moon (the symbol of Chandranath Tirthankar) on the pedestal of the idol and a carving of a flame (Jwale) like formation behind the Yakshi idol that is part of the main idol. The flame like formation confirmed that the Yakshi is Jwalamalini and the idol is that of Lord Chandranath.

Time Period of the Ruins – A clear examination of the ruins, proximity to Gerusoppe, Honnavara & Bhatkal, their Jain heritage, the Jain ruins in the near by villages and the availability of Lord Chandranath idol indicate that there existed a Jain temple in the vicinity and it might belong to the period of Saluva’s rule i.e. around 15 century.

Only Deity in the Vicinity – One other important aspect that is worth noting here is that this is the only deity found in the surroundings of the village for close to 5 Kms. This further substantiates the fact that this village and the surrounding region was predominantly a Jain region.

Worshipped by non Jains & Unique Beliefs – Though we cannot find any Jain families in the village, the villagers look up to this deity with high respect. The idol of Lord Chandranath is worshipped by the local non Jains.

Offerings by Fishermen – The fishermen of the region worship this deity before they start their journey towards the coast. On instances while they have to start early in the morning they pay some amount to the people who perform pooja to the idol. The fishermen are of the belief that by worshiping this deity before the start of their work they will be able to catch more fishes on a particular day.

Women Restricted – Another unique, weird aspect of this deity is that women is restricted from entering the area around the temple ruins. The localites are of the belief that if women enter the vicinity the area is descantified and opine that they experience some negative incidents if non-Jain women enter this area. However, entry to Jain women is not restricted and they have not experienced any negativities.

Construction of Temple – “We are planning to construct a temple for the Chandranath idol and rebuild lost heritage of Upponi in cooperation with the localites, members of Muppane family and Jains in the region” says Mr.Lokaraj Muppane, president of Rani Chennabhairadevi Digambar Jain Trust, Kshemapura (R), Gerusoppe.

Its upto to the Jain community to support the initiative for constructing the Jain temple at saving this unique Jain Heritage Centre.

(The WWW.JAINHERITAGECENTRES.COM team members that were involved in the field visit to this site on December 28, 2013 –  Nagaraj Jain & Nitin H P)

Short URL to the map: http://goo.gl/maps/oqr6t

Disclaimer: We do not intend to hurt the feelings of our fellow Jains through the stories of ruined Jain idols and temples. However, with an intent to bring about awareness among the masses we have published this article.