History – Yalekyatanahalli (also spelled as Yale Kyatanahalli) is a small village situated in the Nelamangala taluk of Bangalore rural district. It once had a sizable Jain population with around 50 to 60 families. With the advent of urbanisation many people migrated to the near by district centres of Tumkur and Bangalore. Hence we can just find around 4 families residing in the village now.

We can find four temples here, two of these temples being found in the village and the other two found on the Brahmagiri hillock adjascent to the village. The two temples in the village have the idols of Bhagawan Adinatha as the main diety. The hillock has two temples, viz. Parshwanatha/Brahma Yaksha and Bahubali.

Every year the annual Masthakabhisheka of Lord Bahubali at one of the temples on the Brahmagiri hillock and the annual pooja mahotsava of all the Jain temples will be performed in themonths of January – February under the guidance of His Holiness Swasti Sri Deevendrakeerthi Bhattarakha Swamiji of the Humcha Jain Mutt. Devotees from Bangalore, Bangalore rural and Tumkur districts who have migrated from this place assemble here during this event.

How to Reach – Yalekyatanahalli is situated in the Nelamangala taluk of Bangalore District and is at a distance of 70 Kms from Bangalore. Good transport facilites are available to this place from Bangalore and Nelamangala.

Main Deity – The garbagriha has a three feet high white coloured marble idol of Lord Adinath as the main deity.

Temple History – The biggest and the oldest among the two temples in the village is called as the dodda basadi. As the name suggest it is bigger in size when compared to the other and is said to have been constructed in the year 1890. It has a a small mukha mantapa, navaranga, sukanasi and a grabagriha. The mukha mantapa is pretty small and leads to a wide navaranga. Besides the door leading to the sukanasi from the navaranga are installed the idols of Goddess Padmavathi and Goddess Jwalamalini to the left and right respectively. On the right side of the sukanasi is installed a three feet high black coloured statue of Lord Parshwanath in padmasana along with a couple of small Jain idols. On the left of the sukanasi are installed the idols of Lord Tirthankara, Lord Bahubali, Yakshi’s and many other small Jain idols. The garbagriha has a three feet high white coloured marble idol of Lord Adinath as the main deity. 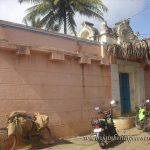 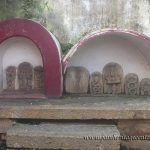 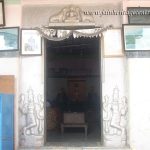 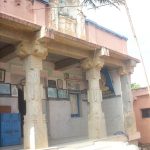 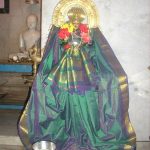 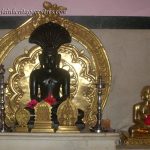 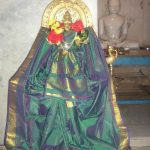 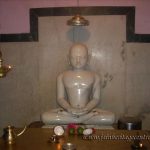 Temple History – The smallest of the two temples is called as the Chikka basadi. This is said to have been constructed in the year 1910. This has a very small mukha mantapa kind of structure, a small hall and the garbagriha. It has a 18 inches high metal idol of Lord Adinath as the main deity. The main idol is flanked by a metal idol of Lord Parshwanatha on the right and Yakshi idols on the left. 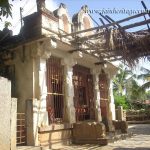 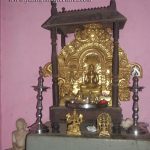 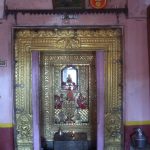 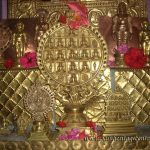 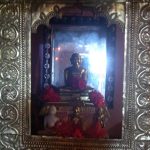 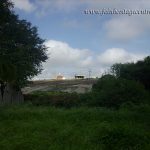 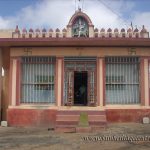 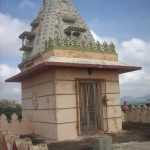 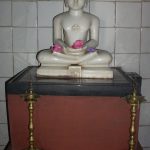 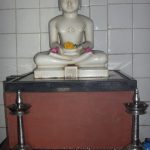 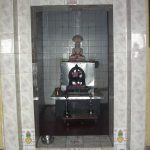 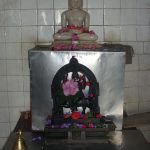 Temple History – Just adjascent to the Parshwanath temple is found the temple of Lord Bahubali. This temple has a very spacious hall and the Garbagriha. The Garbagriha is constructed in a modern style unlike the typical garbagrihas of old Jain temples. It has a white coloured 7 feet high marble idol of Lord Bahubali as the main deity. This idol is installed on a three feet high pedestal and a permanent scafolding structure made of iron has been installed around the idol to facilitate easy movement to the priests and devotees at the time of poojas. The Bahubali idol is surround by around two feet high white coloured marble individual Tirthankara (24 Tirthankaras) idols starting from Lord Adinath to Lord Mahavir from left to right. The Adinath idol is preceded by a 24 inches high Black coloured idol of Dharanendra Yaksha and a 24 inches high black coloured idol of Goddess Padmavathi has been installed at the end after the idol of Lord Mahavir. The garbagriha of the temple along with the Bahubali, Tirthankaras and Yaksha and Yakshi idols was built in the year 1999 under the guidance of His Holiness Swasti Sri Deevendrakeerthi Bhattarakha Swamiji of the Humcha Jain Mutt. Since then the annual Masthakabhishekha of Lord Bahubali has been conducted regularly under the guidance of Sri Devendrakeerthi Bhattarakhji. The construction work of the hall was completed in the year 2009. 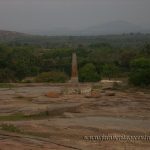 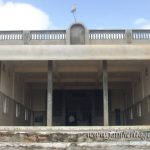 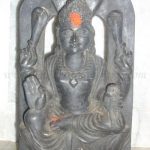 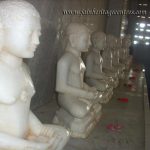 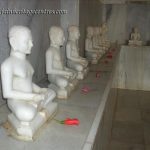 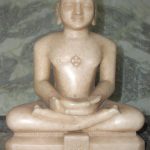 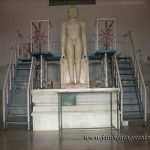