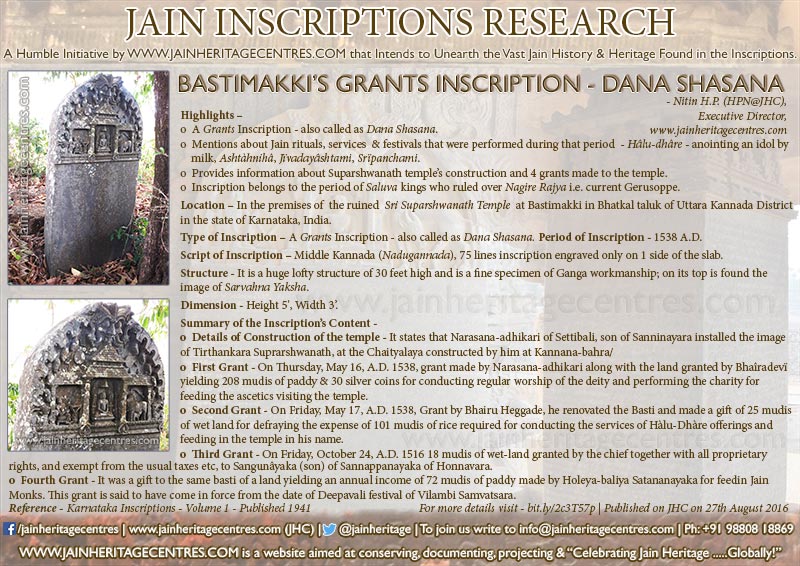 Location – In the premises of the ruined Sri Suparshwanath Temple at Bastimakki in Bhatkal taluk of Uttara Kannada District in the state of Karnataka, India.

Script of Inscription – Middle Kannada (Nadugannada), 75 lines inscription engraved only on 1 side of the slab.

Summary of the Inscription’s Content
This is a composite record mentioning about 4 grants. After paying a tribute to Jina’s order, this record invokes the blessings of Supârsva Jinésvara on Krishnaraya.

The Saka years quoted in the record are current years.

First Grant – The date of this grant is Saka 1461, Vilambi, Jyeshtha, bahula 3rd Thursday, this corresponds to Thursday, May 16, A.D. 1538. On the date specified in 18, of Madiyuragadde-hittalu (Madiyura – is the name of a place, gadde – means paddy fields in Kannada, hittalu –  beans backyard of a house in Kannada) together with the land granted by Bhaîradevï yielding 208 mudis (mudi – is a means of measure. One mudi means 25 to 35 Kgs) of paddy as well as 30 silver coins for conducting regular worship of the deity and performing the charity for feeding the ascetics visiting the temple. This grant was to come in to force from the date of the Deepavali festival of the Târana-Samvatsara.

Second Grant – The date of this grant is the lunar month of Adhîka-Jyeshtha which corresponds to Friday, May 17, A.D. 1538. This grant of this record relates to Bhairu Heggade, son of Maniya Sangunâyaka. He renovated the Basti (Basti means a Digambar Jain temple, this is a term used in Karnataka) and made a gift of 25 mudis of wet land for defraying the expense of 101 mudis of rice required for conducting the services of Hàlu-Dhàre (Hàlu-Dhàre – it is anointing the Tirthankar idol with milk), offerings and feeding in the temple in his name. This is also said to have come in to force from the date of Deepavali festival of the Târana Samvatsara.

Third Grant – The date of this grant is Dhatu Asvayuja bahula 14, Friday, this corresponds to Friday, October 24, A.D. 1516. Itwas made on the date specified in 1-40 when Mahamandal?svara Saluva Immadi Devaraya-Odeya was governing Nagire-rajya and Haive, Tulu and Konkana countries It consists of 18 mudis of wet-land granted by the chief together with ail proprietary rights, and exempt from the usual taxes etc, to Sangunâyaka (son) of Sannappanayaka of Honnavara, in turn endowed it to the basti with a view to providing for the details of service specified.

Fourth Grant – It was a gift to the same basti of a land yielding an annual income of 72 mudis of paddy made by Holeya-baliya Satananayaka for providing for the worship and daily feeding of the Jaina monks, after purchasing it with the price paid into the royal treasury (bhandara) from Mahamandal?svara Krishnadevaraya-Odeya, the Governor of Nagire, Haîve, Tulu and Konkana countries. This grant is said to have come in force from the date of Deepavali festival of Vilambi Samvatsara.

The services and festivals mentioned in the record are