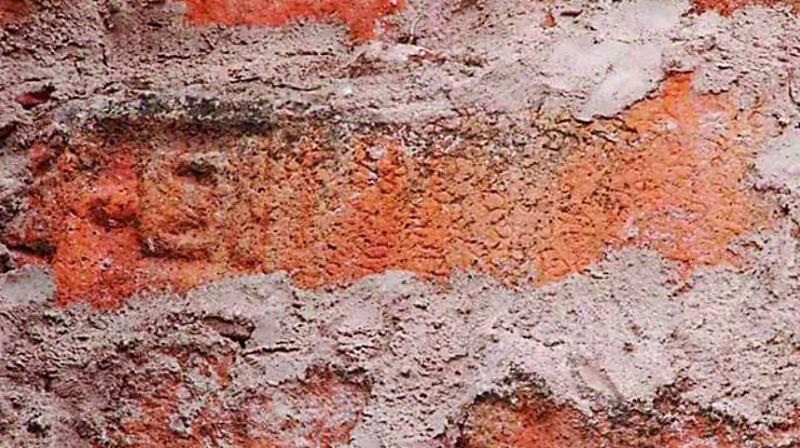 Warangal (Telangana), June 22, 2017: An ancient Jain inscription has been discovered by historians in the Quilashapur fort in Raghunathapalli of Jangaon district. Local historian Reddy Ratnakar Reddy was exploring the village’s prominent historical place, when he first saw the inscription on the left wall of the fort, 15 feet from the ground. Apart from the inscription, an image of a meditating Jain tirthankar, was also engraved on the stone.

Speaking on this discovery, Mr Reddy said, “Stones one foot tall and two feet wide were used for the construction of this wall. During the Kakatiya rule, Jainism was opposed and Shaivism came to prominence. As result, all the Jain temples, basadis, inscriptions etc., were destroyed. Remnants of these temples can still be seen at several places within the perimeter of this village. These remnants were used for the construction of this fort. Along with this inscription, several stones with Jain symbols are also found on the wall.”

The inscription is said to be four-sided and belongs to either the Rashtrakuta or Kalyani Chalukya period. More details can be obtained only after further studies are done. Inside the fort, there is a 40-feet Buruju or watch tower, built entirely of stone. Quilashapur has historic importance and is one of the important tourist spots in the district. During the 18th century, Sarvai Papanna led his army against the Mughal rulers from this village.

Born in 1650, Sarvai Papanna began his movement in 1690 and managed to take over the Kakatiya and Golkonda forts among others. In 1709, he was captured by the Mughals and killed. Local archaeologist Aravind Arya Pakide said that Sarvai Papanna was mentioned in ‘A Social History of the Deccan, 1300-1761: Eight Indian Lives’ written by Cambridge University history professor Richard Eaton.