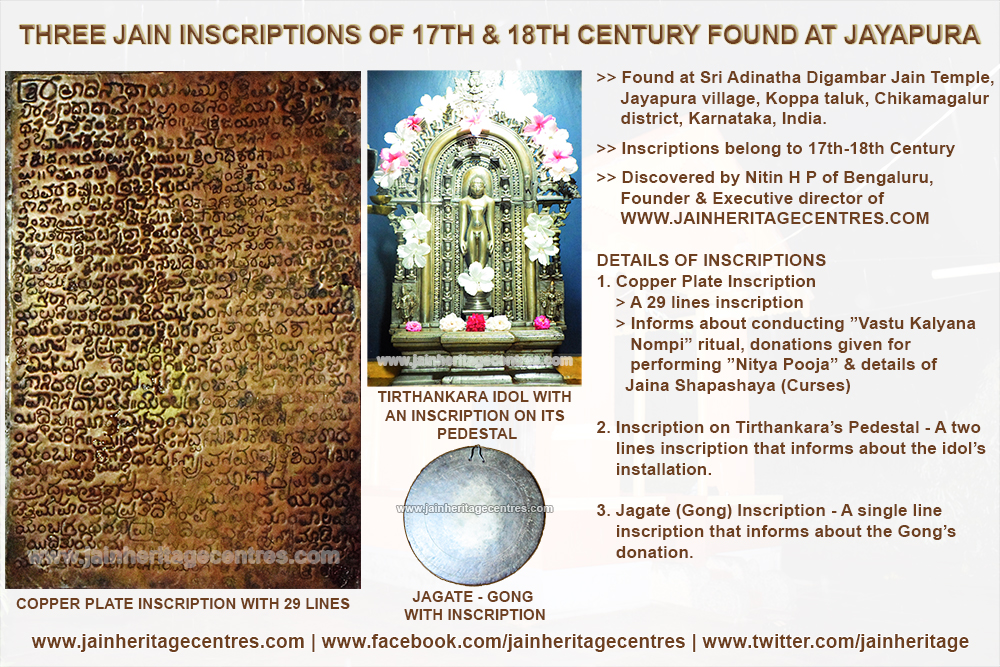 One of the inscriptions is found along the pedestal of Tirthankara Adinath, one on the Jagate and other one is a copper plate inscription.

Inscription along the Tirthankar’s Pedestal

The main deity of the temple is the Pancha Loha (5 metals) idol of Lord Adinath in Kayotsarga (standing posture) along with the idols of 24 Tirthanakaras. On its pedestal is found a 2 lines inscription.

Inscription’s Period – Though the exact period of the inscription is not engraved looking at the script it can be concluded as belonging to 17th-18th Century. Furthermore the inscription mentions that the idol was installed on Shalivahana Shaka Krodhana Nama Samvatsara Magha Shuddha Panchami Monday. These details when compared with Panchanga (Indian Calendar) of the period around 17th – 18th century, it can be concluded that it was installed on 4th December 1724. 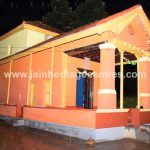 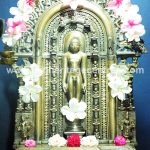 Adinath Tirthankar with inscription on its Pedestal. 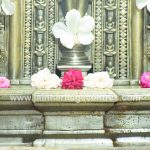 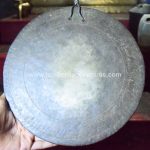 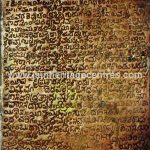 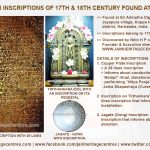 A single line inscription engraved on the Jagate (a thick circular plate made of brass that is beaten similar to a drum during religious rituals) at the temple has been found. It states that a person called Bom. Hom. Chandaiah belonging to the Kallu Basadi area got this Jagate made to Lord Parshwanath of Bappe Basadi.

Inscription’s Details – Based on the inscriptional text it can be concluded that it belonged to 17th-18th century. From the text it is learnt that the Jagate belonged to Bappe Basadi. It had been brought to this Adinath temple at a later date. It further states that the person who got this done belonged to Kallu Basadi area. The Kallu Basadi quoted here is probably the one found at a distance of 3 Kms from this village.

A copper plate inscription has been found in the house of Mr. Nagendra who is looking after the temple.

Inscriptional Content – The inscription starts with a salutation to Lord Adinatha, the first Tirthankara of Jainism. It indicates that on the Shalivahana Saka year 1727 on the Krodhana Namasamvatsara Karthika Shuddha 15th Day i.e. Tuesday 22nd October 1805 Sri Chandrakeerthi Devaru, disciple of Moodabidri’s Sri Charukeerthi Panditacharya Swami did the ‘Vastu Kalyana Nompi’ in the presence of Lord Adinath Swami of Sargebayalu and performed the ‘Udyapane’ related to Vastu Kalyana Nompi. It also informs about the donation given for performing the Panchamrutha Abhisheka, Pooja, Deepa Aradhane and other religious rituals. It further informs that Vardhaiah Shetty and Vrushabaiah Shetty the sons of Pomnupujaya Shetty accepted the donations given to the temple’s treasury and gave an undertaking that the pooja would be performed as per the religious guidelines.

It mentions that this inscription was written by Vrushabaiah Shetty.

Inscription’s Analysis – Mr. Nitin has analyzed the inscription as below –

Place / Region – The inscription starts with a prayer to Tirthankara Adinatha, the 1st Jain Tirthankara. Though the Tirthankara Adinatha’s name is mentioned it does not mention any place. However, it does refer to Moodabidri’s Sri Charukeerthi Panditacharya Swami. So, it might be a possibility that this inscription belonged to the region surrounding Moodabidri. Since the inscription was found at Jayapura’s Sri Adinath Basadi it might be related to this temple or this region. But still the ambiguity prevails.

Donations, Devotion and Measurements – The inscription mentions about the donations given by the Shravakas (Jain house holders) and mentions different measurement terms such as Gadyana, Varaha, Laga, Haga. This gives a hint of the different measurement terms used in that period. Details of these donations further provides proof of the religious devotion of the Jain community in that period and region.

Other Details of the Inscription

All the three inscriptions were found by Nitin during visit to Jayapura in April 2015. A paper related to the copper plate inscription was presented by Mr. Nitin at the recently held 32nd State Annual Conference of Karnataka Itihasa Academy at Badami from 26-28 October 2018.

Acknowledgement – Nitin has thanked inscriptions expert Mr. Ravikumar K Navalagunda of Harihara for reading the inscription and guiding in the research. He has also thanked Sri Nagendra of Adinatha Swamy Basadi at Jayapura for permitting to publish these inscriptions.