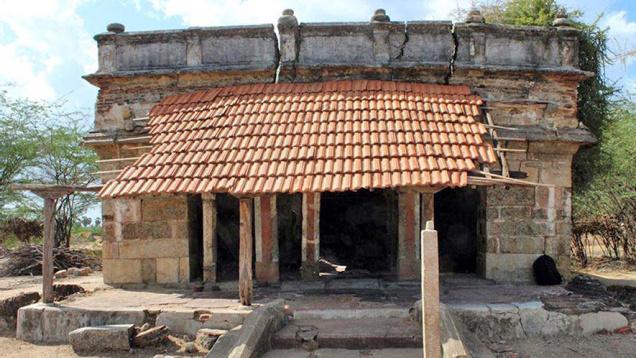 A ninth century Jain temple with sculptures and carved stone image of ‘Parshavanath’ has been discovered at Idaiyamadam in SP Pattinam, near Thondi, by the Ramanathapuram Archaeological and Historical Conservation Centre. V.Rajaguru, an archaeological enthusiast and founder of the Centre, and his team of school teachers who follow archaeology keenly, discovered the dilapidated temple at the tributary of Pambaru. It was found in a forest of ‘kaattu karuvai’ trees during a routine field visit. The temple has three composite parts – a sanctum sanctorum, mandapam and a flag post, all in ruins, said Mr. Rajaguru, a teacher at the SSAM Government Higher Secondary School, Thiruvadanai.

The sculptures and the ‘Parshavanath’ image indicated that it was a ninth century structure. The Parshvanath carved out on stone on the wall with 27 cm by 17 cm frame was similar to one found in Pechipallam, near Keelakuyilkudi. This pointed to the temple possibly dating back to the ninth century, he says.

Last year, Mr. Rajaguru and his team reported discovering ‘Sati temples’ in the district, which could have been built to worship women who committed ‘sati’ (self immolation) after the death of their husbands.

Local people told Mr. Rajaguru’s team that they had seen an idol (Thirtankara) in the sanctum sanctorum of the 9th century temple, and that it had gone missing four years ago. The sanctum has a flat roof with no ‘vimana’, resembling the Pandya style of architecture. There was an image of Sidda Chakra, sculpted on the outside wall.

Large images of fish and crab, carved opposite each other in the Mandapam indicated that the temple could have been dedicated to the fishing community. There are three small and six big images in the inner wall of the sanctum and the temple, which could have been built by the 18th Tirthankara Aranath during Pandya rule, he said.

A few metres away from the temple, there are pillars in which two people are seen in a worshipping posture, umbrellas over their heads. These, Mr. Rajaguru said, possibly represent those who constructed the temple. – News & Image Courtesy: The Hindu