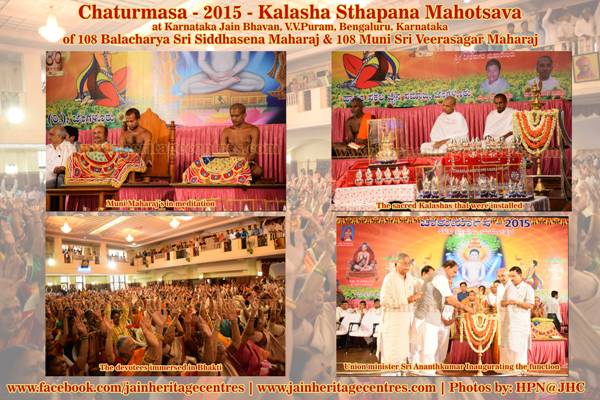 Bangalore (Karnataka), August 3, 2015: Union minister of fertilizers Sri Ananthkumar ianugurated the Chaturmasa Kalasha Sthapana Mahotsava of Balacharya 108 Sri Siddhasena Maharaj and 108 Muni Sri Veerasgarji Maharaj at Karnataka Jain Bhavan. Speaking on the occasion he opined that Jainism is the most sacred of all religions of the world in terms of values it preaches and its practices. He recalled his association with Jain samaj during the 2600th Janma Kalyana Mahotsava celebrations of Lord Mahavir when he was national secretary of the celebrations representing the Govt. of India. He said that it was an opportunity for him to interact with members of Jain community across India and also gave him an opportunity to be a part of many renovation projects of Jain Heritage Centres as a part of the celebrations. He further said that Chaturmas is an opportunity for the community to connect with the Jain ascetics and called upon the community to use it to their benefit and there by paving the way of self purification.
Sri Prahlad Joshi, member of parliament and state BJP president; Sri Dharmasthala Surendrakumar president of Tyagi Seva Samiti; Sri S Jitendra Kumar, president of Karnataka Jain Association and Jain devotees who had arrived for across India were present on he occasion. – Jain Heritage Centres News Service