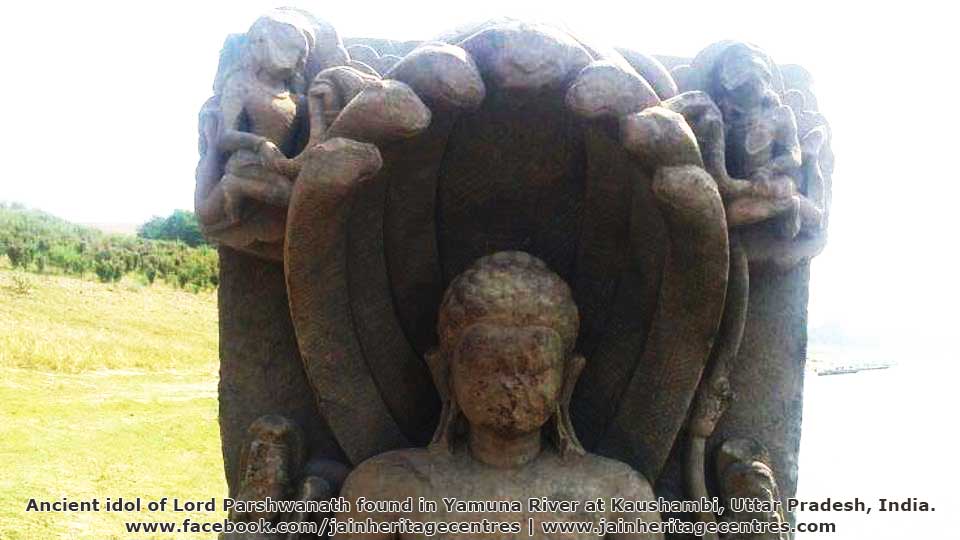 Kaushambi (Uttar Pradesh), March 4, 20017: A 4.5 ft tall stone statue of 23rd Jain Tirthankar Parshavnathji believed to be about 1000-year-old was discovered by some fishermen from Yamuna in Kaushambi area on Wednesday.

The finding strengthens the fact that the region was a key centre for the Jains for ages.

The statue has now been kept at a famous Jain temple in Kaushambi.

Sources said fishermen at Gurbuj Ghat in Gadhwa Kosam Inam village had cast net to catch fish on Wednesday. When they pulled out the net they discovered a large stone statue. Finding it of no use they left the statue at the ghat that was spotted by some villagers.

The villagers informed the priest of Prabhashgiri Jain temple Dinesh Jain who identified the statute.

It is based on the seven-headed serpent (Sheshnag) and is about 3-ft wide and weighs around 4.50 quintals.

Reacting on the issue, historian Ranish Jain said Kaushambi was one of the most ancient Jain sites where sixth Jain Teerthankar was born. Mahaveer Swami had also meditated here. A story in Jain text ‘Avashyak Sutra’ mentions a Jain nun Chandanbala who was sold to a rich man of Kaushambi. She later provided food to Mahaveer Swami and became a nun.

Prof of Ancient History at Allahabad University DP Dubey said the statue may be of 12th century BC. Large number of members of Jain community once inhabited the Pali village in the area.

Director, Allahabad Museum Rajesh Purohit said Jain religion has an important place in history of Kaushambi. There is a small museum at Phabhosa village in the district where Jain statues belonging to 9th and 10th centuries are kept. There may be a temple of Parshavnath on the banks of Yamuna from where the statue was immersed in the river. – Photo & News Courtesy: Hindustan Times, Video Courtesy: Daily Post Punjabi