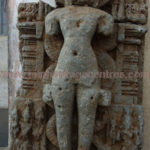 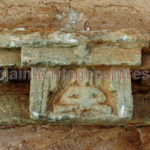 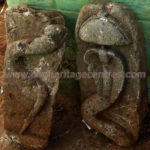 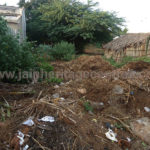 Hunavinadu (Hosadurga Taluk, Chitradurga District, Karnataka), October 7, 2013: An ancient ruined idol of Lord Parshwanath in Kayotsarga (standing posture) was found in the back yard of Ishwara temple at Hunavinadu in Hosadurga taluk of Chitradurga district in Karnataka. The idol was recovered when the N.S.S. students of the Government Pre-University college at Hosadurga were cleaning the dumping yard of the temple as a part of their social service camp on October 7, 2013 at around 12 to 1 pm.

The idol measures about 4 feet 7 inches including the pedestal (only the idol – 3 feet 6 inches) is flanked by Dharanendra Yaksha and Padmavati Yakshi near the feet of the idol with seven hoods at the top. We can find arch like attractive carvings around the idol. However, the entire idol is completely ruined with both the hands cut off and face & hoods chopped off partially, the yaksha and yakshi idols are also ruined.

Quoting about the history of the village one of the elders from the village states that this place was called as Uliganadu and another village Menasunadu situated at a distance of around 1.5 to 2 Kms from this village belonged to the Hoysalan period and were Datti villages (i.e. villages that were left for temple administrations).

Further, looking at these facts and its architectural style we can conclude that the idol belonged to the Hoysalan period. Along with this the lintle of the entrance of a Jain temple’s sanctum sanctorum (garbagriha), Two naga shilpas have also been found. This substantiates the fact that a Jain temple might have existed here. The idol has been kept in the premises of the Ishwara temple. – News Report & Photos From: Anush Ijari, Hosadurga, Jain Heritage Centres News Service