Bahubali idol Returned by US Govt. along with other Artefacts 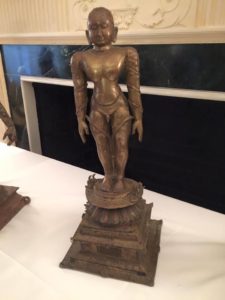 Washington (USA), 7th June 2016: The US on Monday returned Jain idol of Lord Bahubali and over 200 cultural artefacts estimated at USD 100 million to India at a ceremony here attended by visiting prime minister Narendra Modi.

“For some, these artefacts may be measured in monetary terms but for us this is beyond that. It’s a part of our culture and heritage,” the prime minister said at the ceremony held at the Blair House.

Items returned included religious statues, bronzes and terracotta pieces, some dating back 2,000 years, looted from some of India’s most treasured religious sites.

The artefacts that speak to India’s astounding history and beautiful culture are beginning their journey home, US Attorney General Loretta E. Lynch said.

“Protecting the cultural heritage of our global community is important work and we are committed to identifying and returning these priceless items to their countries of origin and rightful owners,” said secretary of homeland security Jeh Johnson said in a statement.

“It’s the responsibility of law enforcement worldwide to ensure criminal smuggling organizations do not profit from the theft of these culturally and historically valuable items,” he said.

The majority of the pieces repatriated in the ceremony were seized during Operation Hidden Idol, an investigation that began in 2007 after Homeland Security Investigations (HIS) special agents received a tip about a shipment of seven crates destined for the US manifested as ‘marble garden table sets’. -News & Images Courtesy: Press Informmation Bureau (PIB)