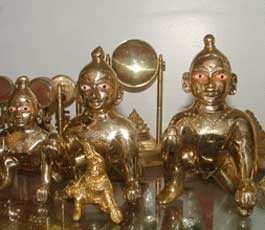 The incident occurred late Tuesday night when some robbers broke open the doors of the temple and took away the idols and cash estimated to be in thousands, from the donation box, police said.

The temple’s priest noticed the theft on Wednesday morning when he went to the temple and informed police about it.

A search has been launched to nab the culprits, police added. – News & Image Courtesy: Samaylive.com