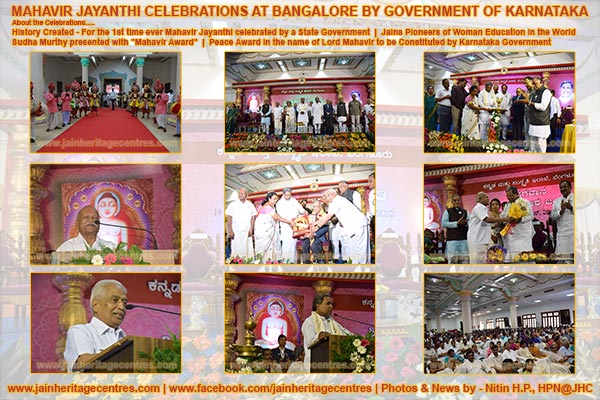 Bengaluru (Karnataka, India), April 19, 2016: The Government of Karnataka state created history by celebrating Mahavir Jayanthi in Bengaluru today. This is the 1st time ever in the history of independent India that Mahavir Jayanthi (Janmakalyana) has been celebrated by a state Government. It can be recalled here that the chief minister of Karnataka, who also happens to be the finance minister had announced in his budget speech about celebrating Mahavir Jayanthi from the state Government and had allocated an amount of Rs. 69 Lakhs towards the celebrations. The Government order in this connection was released on April 7, 2016 where in Rs. 1 Lakh was assigned for the celebrations at district level, Rs. 50,000 at Taluk level and Rs. 25,000 for celebrations at the local level.

Celebrations at Vidhana Soudha – The main function related to this was held at the banquet hall of Vidhana Soudha (the seat of the state legislature of Karnataka). It was well attended by the chief minsiter of Karnataka Sri Siddaramaiah, Kannada and culture minister Smt. Umasri, members of the Karnataka ministry, N.R.Narayanamurthy (chairman of Infosys), noted Kannada and Jain scholar Prof Hampa Nagarajaiah, president of Karnataka Jains Association Sri S. Jitendra Kumar and members of the Jain community. The banquet hall was jam packed with over 2500 people, 500 more than its capacity of accomodating 2000 people. – Nitin H.P. & Jain Heritage Centres News Service