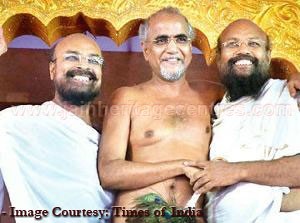 Jaipur (Rajasthan), September 15, 2013: For the first time in 2,500 years, the two sects of Jainism — Shvetambar and Digambar — have come together for the pious

festival of Paryushan. They are jointly observing an 18-day Paryushan in Jaipur.

A combination of ‘par’ (all kinds) and ‘ushan’ (to burn), Paryushan means incinerating all karma. This is the time of the year when Jains ask for forgiveness for their

sins, forgive those who have wronged them and resolve to forget it all.

Close to 2 lakh Jains across Jaipur district of Rajasthan, have moved away from the idea that the two sects are divided by certain subtleties of the religion and are

Across the country, Paryushan of Shvetambar Jains ended on Monday (September 9). But in Jaipur, the festival started on September 2 and will go on till September 19.

While the two sects broadly accept the basic tenets of the religion, they disagree on the details of the life of the 24th Tirthankar Lord Mahavir, on the spiritual

status of women, on whether monks should wear clothes, on certain rituals and which texts should be accepted as scriptures.

“I called on the entire Jain community to give up their differences and come together and realize that the religion is stronger than their individual beliefs,” said

Earlier, he gave a clarion call to Jains when he was in Bangalore 6 years ago and told people to keep aside the finer points of the two sects and come together.

“That”, he said, “would be the real honour to the Tirthankar (the liberated, omniscient ones).”

yaad rakho bas (not eight, not 10, but remember 18 days of Paryushan),” the entire community, made up of about 60% Digambars and 40% Shvetambars, accepted the idea.

“The differences in the two sects have been deep at a philosophical level. The unification of the two sects marks a historical milestone in the religion which has

never seen the Shvetambars and Digambars come together to celebrate Paryushan,” said Babulal Jain Ujjwal, a veritable fount of information on Jainism.

On September 22, all Jains of Jaipur will seek forgiveness in a community gathering, like a common samvatsari or the closure of Paryushan, the day of repentance of

past sins and seeking forgiveness from all, for hurting them knowingly or even unknowingly. – News & Image Courtesy: Times of India