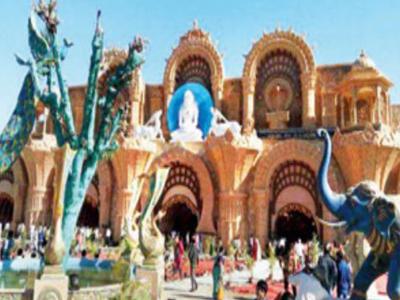 Dantrai (Sirohi District, Rajasthan), February 22, 2017: It was a temple renovation like few others. Jains across the country observed 68.6 crore fasts, 40,000 of them congregated at the Shri Jirwala Parshvanath Jain Tirth and more than Rs 60 crore was reportedly raised through bids for rights to conduct various rituals as six-day celebrations marked the restoration of the 2,800 -year-old temple in Dantrai village of Sirohi district in Rajasthan which was razed in an earthquake in 2001.

Preparations for the event started over a year ago, when a chariot started out from Dantrai and travelled over 15,000km across the country to invite people. Around 1,500 monks travelled on foot to the temple for the Pratishtha celebrations which concluded on February 2 with the idol of Parshvanath, the 23rd Jain tirthankar, being placed on his throne after 700 years. The temple was rebuilt in 13 years using the famed white Makrana marble.

About Rs 6 crore was spent on the preparations, including modelling the temple and the adjourning villages on Varanasi, Parshvanath’s birth place.

Eleven massive entry gates were erected to welcome devotees, gaily-decorated durbars were set up, a feast fit for kings was served on large thals, and, in a grand finale, flower was showered from the skies. “This was a once-in-a-lifetime occasion for many Jains. Placing the lord back on his original throne was like double celebration. It has led to so much happiness in the community,” said Acharya Gunaratnasuriji maharajsaheb, a Jain monk who oversaw the preparations. Considering that demonetisation had led to talks of the event, like many other Jain community functions, being called off, it was indeed double celebration.

Ramanlal Jain, a temple trustee, said the bids were only close to Rs 35-40 crore. “All the transactions were made through RTGS. Who has that kind of cash any more post-notebandi?” he said. Understandably, the highest bid was for placing the idol of Lord Parshvanath on his throne.

In 1191 (Vikram Samvat), according to the Hindu calendar, the Parshvanath idol was placed on the throne by Dhandhal Seth. Two hundred years later, the Mughals attacked the village and the idol was moved to protect it. Over the next 700-odd years, other idols were placed at the main altar. Finally, on February 2, the Parshvanath idol returned to its original place. All the other idols were also given their rightful place in the temple.

As a pre-cursor to the festival, Jains celebrated the Panch Kalyanak Mahotsav, the celebration that marks the five milestones of life: conception, birth, deeksha divas (attainment of monkhood), kaivalya gyan (enlightenment) and moksha of Parshvanath. – News & Image Courtesy: Times of India