When he spoke sweet, not many took him seriously. But now with his speech turning bitter, nobody ignores him. Well known as a krantikari — revolutionary saint, Muni Tarunsagar has a special connect with Ahmedabad. He started his blockbuster book ‘Kadve Pravachan’ (Bitter Discourse) during his stay here in 2003. In an honest chat, Tarunsagar shares his views on an array of subjects – from his ‘Kadve Pravachan’ and Jainism in this era to corruption, media, politics and ‘spirituality’ in politics. 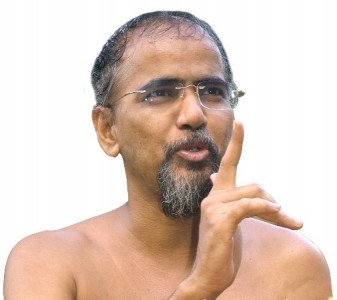 Ahmedabad (Gujarat), August 9, 2012:
his take sweet & bitter discourse
I believe that effect of sweet discourse ends at the ears while its bitter counterpart burrows through heart of the listener. If talks touch hearts, then only need for change can be felt.

On idea of Kadve Pravachan
I spoke very sweet for first 10 years of sainthood. Then one day, I felt that I got a message from Mahavir, who is within me, that people I’m speaking to are deaf and blind. “They are neither hearing nor watching you. Ten years of your life have gone by and the future will also be spent like this!”

The next day, I spoke bitter. I said that I want to free Lord Mahavir from the temples and bring him to the busiest crossroad of the city. I want Him to be free of the Jains so that His life and thoughts can reach out to the world.

I was about 25 at that time but what I had said was not casual speech. I hadn’t spoken anything without giving a thought to it. I have continued with this philosophy till today.

Response to the Kadve Pravachan
The response was unexpected. When I was speaking sweet, only 25 or 50 people turned up to hear me. These were those who were not wanted by their daughter-in-laws at home or banished by their sons from businesses. Now, I speak harsh and the whole society listens – Jains are hardly 10% of this crowd. (pauses)

I believe that wells shouldn’t be locked. If they are, then the water cannot flow out from them – the water will stagnate and eventually will be dirty. Similarly, we have imprisoned great personalities in temples. Stories of the lives of Ram, Krishna, Mahavir and Buddha, and their messages are for everybody.

I had campaigned for allowing commoners into Mahavir’s temples or else allow Him to reach out to the man on the streets.

On future of Jainism in 21st century
There are two aspects in life – quantity and quality. While quantity-wise Jains are a small number, teachings of Lord Mahavir in ahimsa, brahmacharya, aparigrah and truth form the rich quality of Jainism, also known as Anuvrat.

The world today talks of disarmament plonked on a heap of weapons! I believe in Mahavir’s philosophy of ahimsa. When India and Pakistan sit for a dialogue, I feel it is Mahavir’s philosophy of syadvad in play – where one listens to his enemy as well. Today, humankind is concerned about AIDS. I feel Mahavir’s message of brahmacharya is very much relevant here.

There are different viewpoints with as many myriad names existing today. But the idea and core philosophy behind all of them is Mahavir’s message. Governments, in some ways, are working inline with His teachings.

What I’ve understood is that Jainism is not a community or a race. It is a practice, a way of life. None of our 24 Tirthankaras were Jain. They were Kshatriya and their disciples, Brahmins. Any person can become Jain by practicing Mahavir’s message because a Jain is not made by his community.

On politics and politicians
Politicians are not untouchables. I wouldn’t say that politics should be untouched but I agree that it is dirty, filthy. However, it is only saints that can talk in a straightforward manner with politicians. When I addressed assembly members of Madhya Pradesh, every minister and MLA knew that Tarunsagar ji will speak bitter but the truth. They listened to all my tarts.

It is my fortune that though I talk harsh, people listen to me with all their love. They don’t feel bad. They know I will speak bitter about them but they (political leaders) still invite me and listen to me.

This is like if it rains in the farm, it will reap green harvest. If it rains on asphalt, nothing grows there but at least the roads are cleaned by the water. The muck is washed away. Similarly, people in politics are like the asphalt road. They cannot yield any harvest but their stains are washed away when they listen to saints.

Every person has positive and negative points. Many see only the negative side while several others focus on the brighter aspects. ‘The small hut of poorest of the poor has at least one door and window’. Similarly, the most sinful will have at least one good quality.

On Baba Ramdev and spirituality in politics
I believe when religion enters politics, Ramayana is created and when politics mixes with religion, it is the birth of Mahabharata. Neeti in Rajneeti (politics) indicates religion. Commoners like us should support Baba Ramdev or any other saint in their endeavour till their goal is pious. If we come to know of any hidden agenda behind these movements, we should withdraw ourselves from it.

Saints should guide political leaders, and not be politically active themselves. In our country, kings lived in palaces but they walked barefoot to a saint’s hut to seek guidance from him. There is no problem here.

On honesty & corruption
People, who looted in a big way, have become prominent industrialists and businessmen. Those with a smaller catch have become merchants while the rest who didn’t get an opportunity to loot or rob, are labeled honest. We are honest out of compulsion, not because of our values but lack of opportunities to be corrupt. The country cannot function with such people. I inspire people to be honest by values, ethics and morals. I said in Madhya Pradesh state assembly that 90% of leaders and bureaucrats are corrupt and the country is running courtesy the 10% who are clean.Shri Krishna said that he is everywhere and in everything. I doubt that. But yes, if corruption says the same thing, I will believe without a doubt.

Corruption has diseased our society. We think that it can be removed, but it is impossible to do so. Social evils like theft and violence existed in the times of Mahavir and Buddha. It is out responsibility that we draw a line longer than these social ills.

There is no dearth of good people. They far outnumber the few thousand anti-social elements. These bad are active because good is inactive. We need to light a lamp at our doorsteps to remove darkness from all of society. Eradicating corruption isn’t only the government’s duty, we too are citizens of this country and must do our bit for the society. – News Courtesy: DNA India