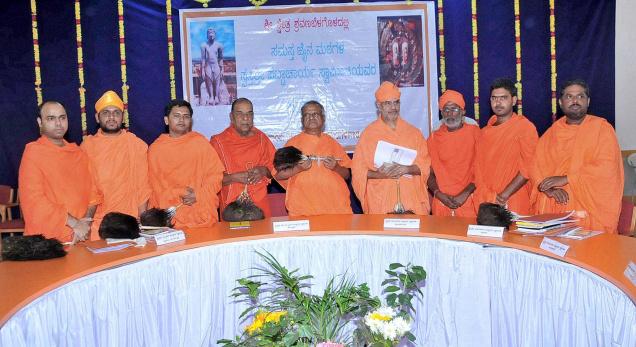 Shravanabelagola (Hassan District, Karnataka), September 2, 2015: The convention of Jain seers here on Tuesday resolved to stop protesting against Sallekhana / Santhara judgement as the Supreme Court had stayed the Rajasthan High Court’s verdict on the practice.

Addressing a press conference here on Tuesday, Charukeerti Bhattaraka Swamy of the Jain mutt at Shravanabelagola, said the Supreme Court’s stay had provided some relief to the people of the community.

“The matter will be heard in detail by the Supreme Court. The seers had decided to collect documents and inscriptions related to the santhara to provide support to the argument at Supreme Court. Religion could not be altered to suit the changing time,” the seer said. The convention also resolved to spread awareness among people of the community about decrease in Jain population. As per the 2011 census, 45 lakh Jains were there in the country.

“When compared to the previous census, there is a decline in Jain population in the country.

The seers decided to spread awareness on this issue among the community people,” he said.

The seers decided to offer special prayers in Jain temples in view of the drought situation in the State. – Image & News Courtesy: The Hindu