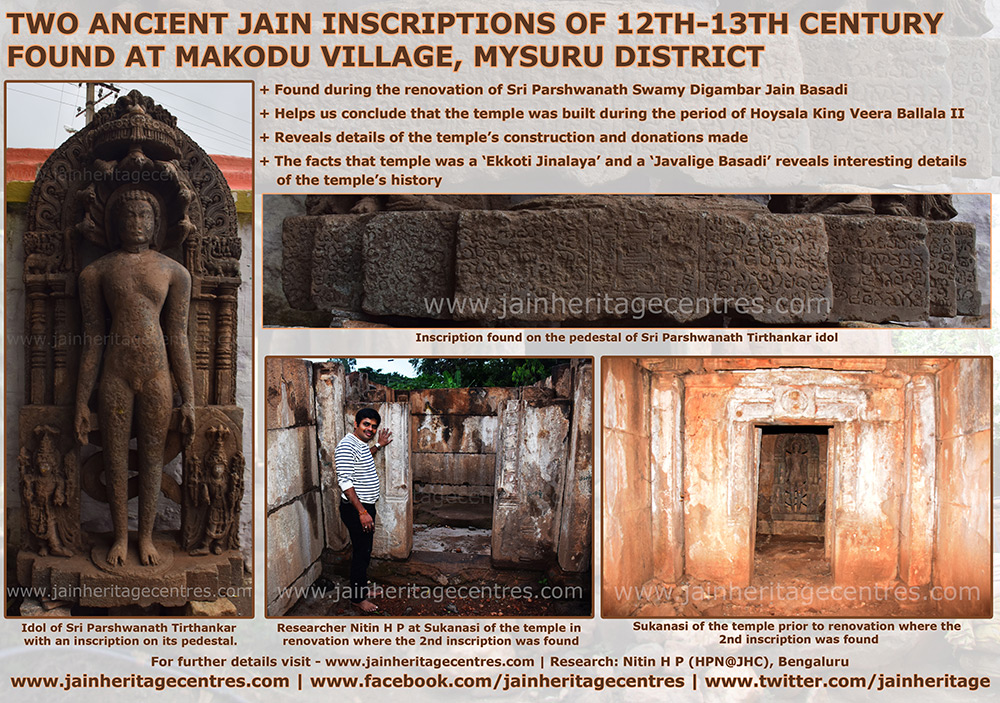 Mysuru (Karnataka), 6th October 2018: Two ancient Jain inscriptions of 12th-13th century have been found at Sri Parshwanath Swamy Basadi in Makodu village, Periyapatna Taluk, Mysuru district. Nitin H P, the founder and executive director of www.jainheritagecentres.com (JHC) has informed that, “the inscriptions are discovered during the renovation work of the temple. One of the inscriptions is found at the pedestal of the main deity, Parshwanath Tirthankar and the other inscription is found on either side of the door leading to Garbhagriha from Sukanasi”.

“We found some indistinctly visible text along the pedestal on our field visit earlier as it was completely covered with mud”, says Nitin an IT professional and a heritage enthusiast. “When the renovation of the temple was taken up, the idol was cleaned and we were able to read the inscriptional text along the pedestal” he adds. He further says that “the inscription in the Sukanasi was found when the temple was rebuilt as a part of the temple’s renovation work”.

“The renovation work of this temple has been led by Makodu Bhagawan Sri Parshwanath Digambar Jain Seva Trust under the guidance of His Holiness Swasti Sri Bhuvanakeerthi Bhattarakha Swamiji, the pontiff of Kanakagiri Jain Math. The temple’s renovation has been taken up by Sri Dharmasthala Dharmotthana Trust being guided by Dr.D.Veerendra Heggade of Dharmasthala”, says Nitin who is also one of the founder trustees of the temple trust.

Inscriptional Details – Mr. Nitin, author of the book Jinayatra gives a vivid description of both the inscriptions.

Inscription on the Pedestal of Parshwanath Tirthankar Idol – Including the central section it can be divided into seven parts.

This is a Pada Peeta Shasana (inscription found along the pedestal) belonging to the period of Hoysala King Veera Ballala II. Looking at the word ’Makodi’ mentioned in the inscription it can be assumed that this is a transformation of the word ‘MahaKodi’ and has further led to the present name of the village, i.e. Makodu. We can further conclude that the word ‘MahaKodi’ might have been used to indicate the ‘Kodi’ (over flowing) of a lake besides the village and hence the village might have been called as ‘Mahakodi’.

Since the inscriptional text is distorted intermittently the complete text is not readable. In spite of this the names found the inscription, viz – Seenabhoova Eaachanna, Edanana Maachiyanna, Soomantha Eaachana’s son, Babbi Gowda’s son Devaiah and others who were disciples of a Jain muni with the name ending as “Vimuktha” might have constructed this temple. Furthermore Govindabbe, a disciple of the same muni had given donations for maintaining this temple. The names used in the inscription help us to conclude that people belonging to different professions have contributed towards the construction of this temple.

Period – Since the name of Hoysala King Veera Ballala II (A.D. 1273-1320) has been mentioned, it can be concluded that it belonged to 12th-13th century and the temple might also have been built around the same period.

The term ‘Javalige’ used in the inscription is a synonym of the word Yapaniya. Yapaniya is a Jain ascetic sect. There are 3 ascetic sects in Karnataka, viz – 1. Nirgrantha MuniSangha (MulaSangha) 2. Shwetapata MuniSangha and 3. Yapaniya Sangha. The first one belongs to Digambar sect, second to Swethambar sect and Yapaniya is a link between the two. Yapaniyas were followers of the nudity of Digambars and philosophy of Swethambars. Though we can find many temples belonging to the Yapaniya sangha in northern Karnataka not many are found in the Mysuru region.

Text found on the left above Sukanasi’s lintel

Text found on the right above the Sukanasi’s lintel

Summary of both the Inscriptions – The Parshwanth Jinalaya at Makodu belonged to the Yapaniya Sangha and was under the administrative influence of ShaivaYatis. It belonged to the period of the Hoysala King Vera Ballala II (A.D. 1173-1220). Seenabhoova Eaachanna, Edanana Maachiyanna, Soomantha Eaachana’s son, Babbi Gowda’s son Devaiah and others, disciples of a Jain muni with the name ending as “Vimuktha” might have constructed this temple. Govindabbe, a disciple of the same muni had given donations for maintaining this temple.

Acknowledgement – Nitin has thanked Sri RaviKumar K Navalagunda (Harihara) for his help in deciphering the inscriptional text and guiding him in the research. He has also thanked Sri N Prasannna Kumar (Mysuru) who has played a pivotal role in the temple’s renovation, Sri Jayakeerthi (Horanadu) who is in charge of the temple’s renovation, members of the temple trust, Sri Srinivas of Makodu, villagers of Makodu and members of JHC team.

About Nitin H P – Nitin H.P. holds a bachelor of engineering degree in Mechanical Engineering from the University of Mysore. He is an IT professional with over 12 years of experience and is currently working as Director Technology – Langoor Digital Pvt. Ltd., Bengaluru. He is the Founder and Executive Director of the popular Jain website WWW.JAINHERITAGECENTRES.COM. He has been managing it since May 2002. His 1st book ‘Jinayatra’, a collection of research articles on Karnataka’s Jain Heritage was published in Feb 2018. 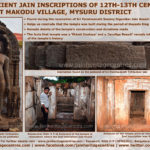 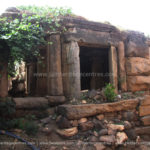 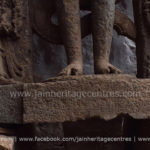 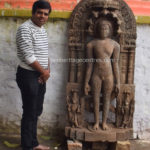 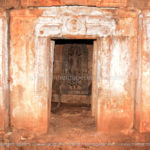 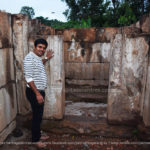 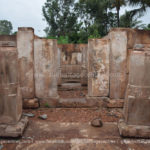 The Temple Under Renovation