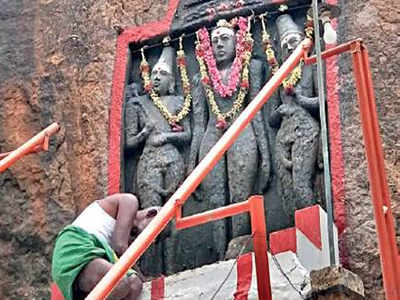 Chennai (Tamil Nadu), 30th August 2018: A team of Jain scholars and heritage enthusiasts recently came upon a bas relief carved out of a rock hill in a village in Karur resembling Adinatha (Rishabha), the first Tirthankara of Jains. They also found locals were worshipping the structure as ‘mottai andavar’ (Lord Murugan).

“The head and parts of the face of the image carved out of the hill seem to have been modified. It’s difficult to find the stylistic patterns, but we believe that it is Adinatha, mainly because of the height and style associated with the eyes. The two figures on both the sides are attendant deities,” said K Ajithadoss, a Chennai-based Jain scholar.

“Another prominent feature the 10th century bas relief in Kanakuvelanpatti village near Aravakurichi is the hair-style. “The long hair is usually seen on sculptures of Adinatha. If you look at the head, you will know the hair style has close similarities with that of some old sculptures of Adinatha,” said Ajithadoss. He was part of the group that made the discovery during the 56th Ahimsa Walk, a monthly event, to reclaim neglected Jain idols and monuments in remote villages of Tamil Nadu.

“The confirmation of the group gives credibility to the claim of a few scholars six months ago that the bas relief in Kanakuvelanpatti village was of Bahubali, son of Adinatha.

“This is not the first instance of Jain idols being mistaken for Hindu gods. “We visit many remote villages where people perform puja on Jain Tirithankara idols believing that they are village deities. A similar thing is taking place in Kanakuvelanpatti too. They strongly believe that it’s Lord Murugan,” said P Rajendra Prasad, who led the walk that helps create awareness about the historic and cultural significance associated with Jain sites in the state.
“Though puja is being performed, the team found the ancient bas relief to be in ruins. “We don’t have a clear picture of what existed here 1,000 years ago. There might be more structures nearby and those that might have been demolished or destroyed by natural calamities. If we conduct more studies in and around Karur, we can get a clear idea of how Jainism influenced the region centuries ago,” he said.

“Most Jain sites in Tamil Nadu are neglected. While some are taken care of by the ASI, many Jain sites are preserved by heritage enthusiasts and Tamil Jains. Districts like Tiruvannamalai, Villupuram and Kancheepuram have the most number of abandoned and neglected Jain sites. “We don’t want to disturb the puja being performed here but we want to create awareness about the history of the place,” said Rajendra. – News & Image Courtesy: Times of India