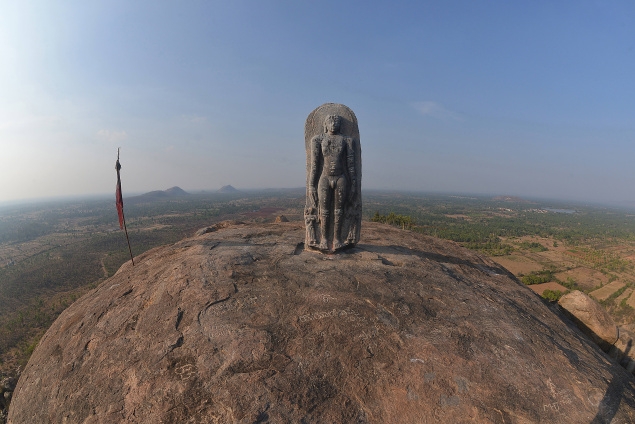 Less than a kilometre from the Kanakagiri hillock at Artipura is a steep hill called Savanappana Gudda. On top of it stands a 10-foot-tall monolithic sculpture of Gomatesvara. While the imposing 57-foot (17.37-metre) monolithic statue of Gomatesvara, or Prince Bahubali, at Sravanabelagola in Karnataka is world famous, the one at Savanappana Gudda is a big draw for specialists in Jainism.

The arduous climb up Savanappana Gudda hill is worth it when you get to see the Bahubali sculpture there. The prince is doing penance in the forest, creepers have grown around his feet, and his two sisters are entreating him to give up the penance. Prince Bahubali gave up fighting with his brother and walked the path of penance after the example of Mahavir. Arun Raj T. and P. Aravazhi of the Archaeological Survey of India (ASI), Bengaluru Circle, contend that the Gomatesvara at Savanappana Gudda was sculpted about 65 years before the one at Sravanabelagola.

Just as there are Kanakagiri and Savanappana Gudda at Artipura, there are the twin hills Vindhyagiri/Indragiri and Chandragiri at Sravanabelagola. The Gomatesvara at Sravanabelagola was sculpted during the reign of the Ganga king Rajamalla IV (regnal years 974-985 C.E.), and the credit for it is given to his minister Chamundaraya. It is carved out of granite rock.

However, opinion is divided on which sculpture is older. Professor K. Ajithadoss Jain, a Tamil Jain, said the Gomatesvara at Sravanabelagola was more sophisticated in its features and hence the other would be older. However, other specialists in Jaina iconography say “it is a matter of debate”.

In an article “Nishidhi stones and the ritual of sallekhana” in Homage to Shravana Belgola, first published in 1981, Professor A. Sundara, noted archaeologist from Karnataka, who calls the Gomatesvara at Sravanabelagola a “Jaina iconographical colossus”, says: “The date of its creation is taken as 983 but the date of its consecration is equivalent to 1028. We have no explicit record as to when the work began. But it could only be after 978 for the Chamundaraya Purana composed by Chamundaraya himself, during this year, does not make any mention of this great achievement.”