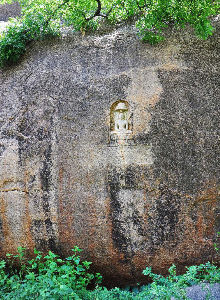 The sculpture of a Jain Tirthankara on top of the Arittapatti hill near Melur. Illegal quarrying in Arittapatti has been suspended now.

A bird’s-eye view from the Panchapandavar hillock at Keezhavalavu on the Melur-Tiruppattur road gives an idea of the threat posed by illegal quarrying to ancient monuments and archaeological sites. Private quarry operators have not spared archaeological sites. Thousands of granite blocks are piled up around the hillock as the areas close to the foothills have been converted into a storage yard.

The archaeologist C. Santhalingam told that the private quarries operated in clear violation of the Ancient Monument (Preservation and Conservation) Act, 1925, which laid down that any addition or alteration of structures would be permitted only 300 metres away from a monument. Of this, the first 100 metres would be treated as restricted area and the remaining 200 metres as regulated area. Within the restricted area, permission would not be granted for any construction activity.

These rules have been flouted in respect of certain monuments including the 3rd century B.C. Jain monument at Thiruvadavur where quarrying is done up to a distance of 50 metres from the monument, which is under the protection of the State Archaeology Department. Even the approach road to the site has been blocked. “If quarrying is allowed any further, nobody can visit or inspect the Jain rock-bed there,” Santhalingam said.

The explosives used for quarrying would also affect the boulders that were part of the monument, he warned.

The 2nd century B.C. Jain monument at the Panchapandavar hillock, which was declared a national monument by the Archaeological Survey of India (ASI), escaped, thanks to the intervention of the Madras High Court. The Society for Community Organisation Trust took up its care with the support of the local people in 2008.

Another site where illegal quarrying was abandoned owing to the local initiative was the 8th-century cave temple of Siva at Arittapatti in Melur taluk. The site had been declared a protected monument by the State Archaeology Department. The 1st century B.C. Jain monuments at Muthupatti village on the Madurai-Theni road under the ASI had also been saved, Santhalingam said. – Article Courtesy: Frontline, Article by – S.Dorairaj, Photo by: S.James